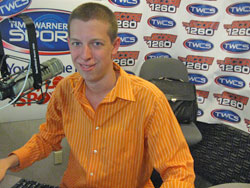 It is seriously turning into the Golden Era of Syracuse Sports-Talk Radio really quick around here.  You know Brent Axe and you know Matt Mc's Sports Fix.  Then Bud & The Manchild returned to the airwaves.  Then the ESPN station finally decided to Disturb The Peace.  All that was left to do was find someone to fill that sliver of time between 12-2 with some all-things-SU chatter on your radio dial.

Danny Parkins is that someone, dammit,  The Danny Parkins Show debuted on Tuesday on The Score 1260.  I lobbed some quick questions Danny's way in an attempt to understand what will make his show a little bit different.  Well, that and I wanted to see if I could get some dirt on Axe, whose show Danny used to produce.

Justify your show's existence without using the phrases "I'm going to tell it like it is", "this will be a different type of local sports talk show" or that the show will be a "hipper and cooler sports-talk show than you're used to."

Truly, my show will be better than any other on the air because I'll work harder at it than anyone else and I don't need to have any filter. Bud/Manchild/Axe are Central New York lifers so they need to always be aware of longstanding relationships w/ the athletic department, teams, etc. I'm just trying to put together the best/most entertaining 2 hours of radio I can every day so people recognize my talents. If I piss off a coach or SID in the process then so be it. I never say anything I don't believe or for the expressed purpose of getting that reaction, but I'm not afraid to ruffle any feathers either.

What's Brent Axe really like behind the scenes?  As big a tyrant as we think?

There's a reason if you watch him on Time Warner it sometimes looks distorted... Once they simulcasted his show on tv his head got too big for standard definition.  : )

Take that, Brent!  Danny has Big Ten Network president Mark Silverman on the line today, methinks his interest in Syracuse might come.  Check it out.