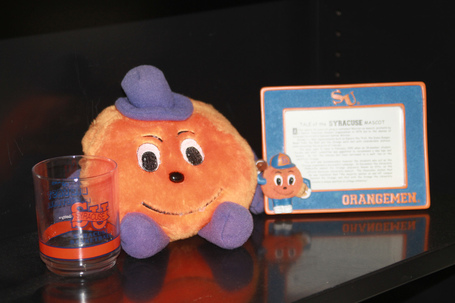 2. Break-the-Record Night: This was the first push by the University to "Break-the-Record" at an SU Basketball game. I immediately purchased the photo and spent about $300 framing the piece. It's the #1 conversation starter in my office. 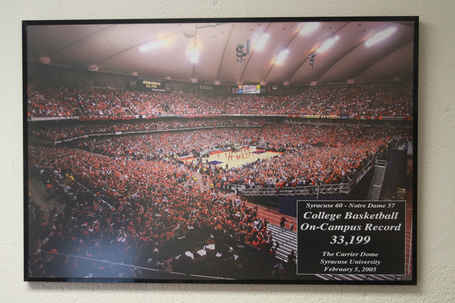 3. Tim Vesling and Tim Green: Both favorites growing up, these two photos sit proudly in my office as well. Our family went to a summer practice and I walked over to an injured Tim Vesling to say hello. A lonely kicker, he gave me his helmet to try on and I was a fan ever since. Unbeknown st to me, my father tracked him down about 10 years later and he sent me his only copy of his game program and wrote "It's nice to know I had a fan!" - - I wrote Tim Green and he sent back a signed photo that was later water damaged in a move. Both hang with a modern-day Otto in my office. 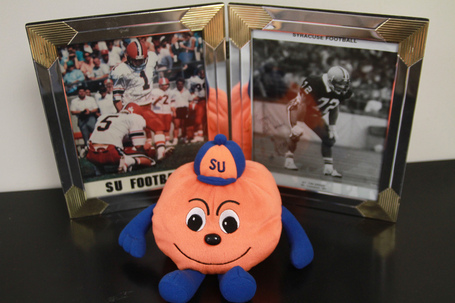 4. Original Papers From the Championship Weekend: This clearly speaks for itself. I will eventually get these properly framed and in protective glass. The have some sun damage, but are proud memories of the Championship run. 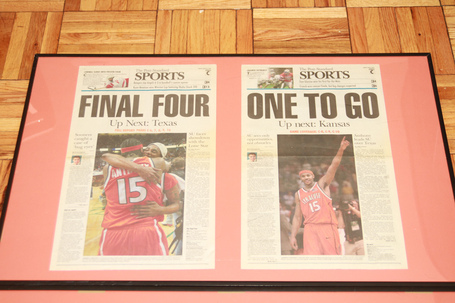 5. Enlarged Donovan Postcard: The S.U. Bookstore included this as a postcard with every purchase. I loved and the writing that I high-res scanned the card and blew-it up. 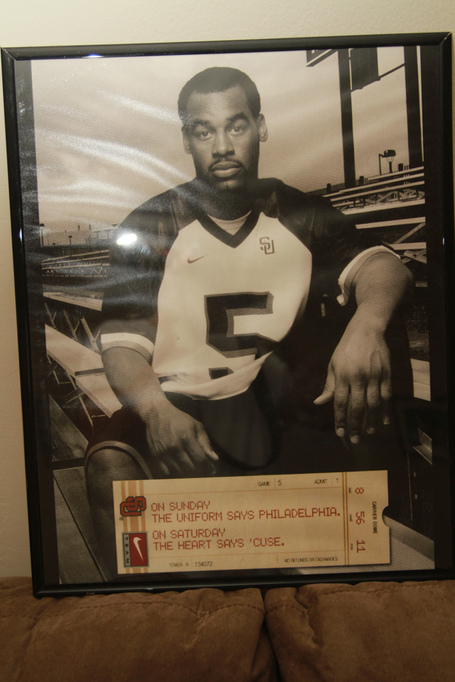 6. My Acceptance Letter Signed by Bob Costas: During my first week of grad school, Bob Costas was scheduled to speak to the Broadcast Journalism majors with others allowed to sit-in. I skipped half of my Communication Law Class to listen to the master and later had him sign my acceptance letter, which I had tucked away in a folder just in-case there were issues! 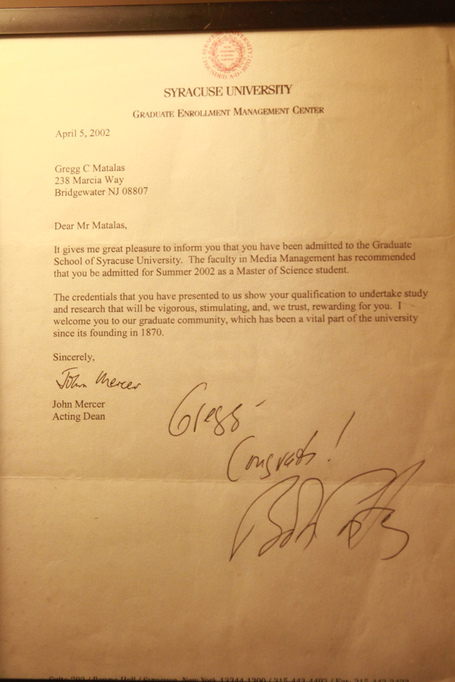 7. Honor Ernie Davis: The pride and joy of my collection. My father fought long and hard to find this in the early 90's and coupled with the Heisman Action Figure and an original print of The Elmira Express, this is an exhibit hard to double. 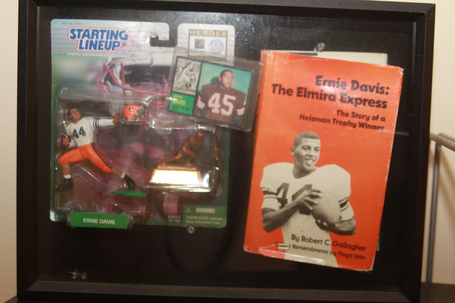 8. Honor Donovan McNabb: An autographed SU helmet, a Donovan Beanie Baby (in the bag) and Autographed football, this collection is waiting for a couple hundred dollars and a proper englassed home. 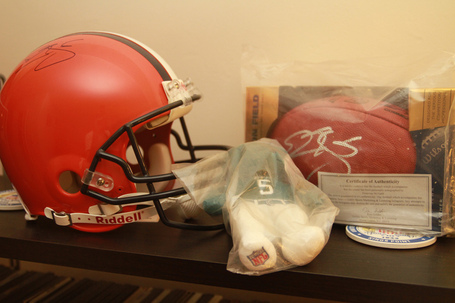 9. Classic Cards: Passed from my father to me, these are the men who helped build the SU tradition of excellence. (Restore 44!) 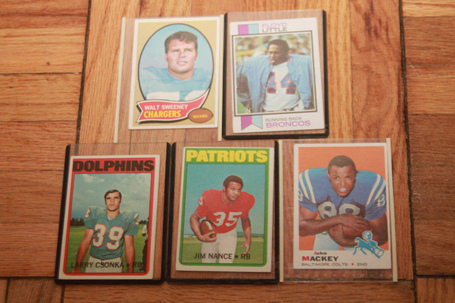 10. Donovan's Va Tech Triumph!: Having 20 heart attacks, I personally watched McNabb lead one of the most amazing comebacks in NCAA history to beat Virginia Tech on the last play of the game. When I walked into a Steiner Sports Store to see this limited shot of McNabb celebrating that walk-off victory, I promptly dropped the $400 for the framed photo. 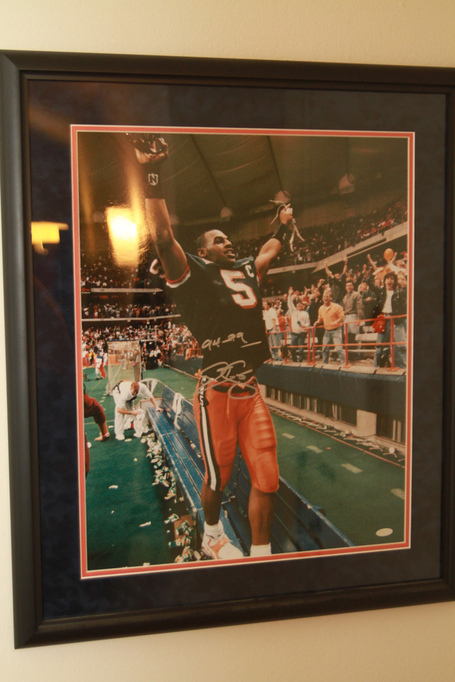 11. 1986 Photos: At a mature nine years old, I sought after every autograph back in the day with my parents in tow with a cheap 1980's camera. This was taken the summer of 1986, Rob Moore was a nobody standing behind Scott Schwedes. I could definitely take down Ted Gregory! 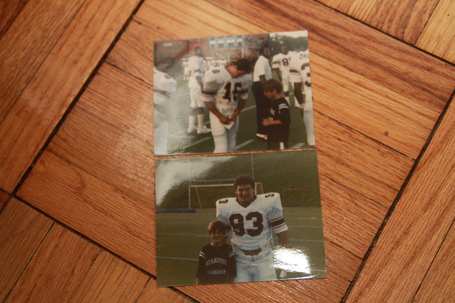 12. Donny Mc!: During the same summer event at Manley, we snapped this photo of Don McPherson. A random photo at the time, it emerged 20 years later when Don McPherson came to speak to the freshmen plebes at the U.S. Merchant Marine Academy. I dug the photo out of the closest and had McPherson sign the card to my mom and dad. He added to the signature: "1987 was a looooonng time ago!" 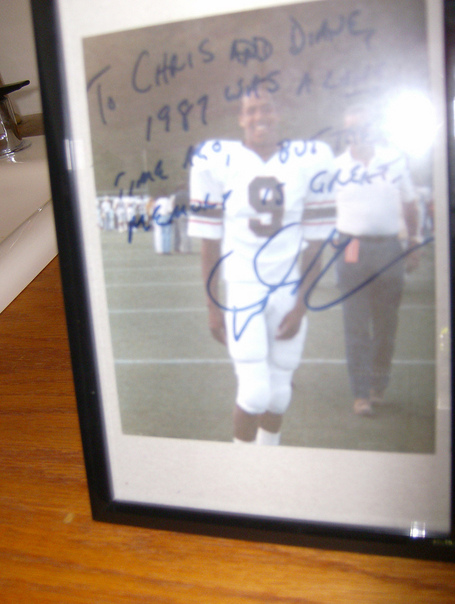 13. CUSE44 License Plate: My father's licence plate for many years in the great western state of California. You don't see too many of these around! 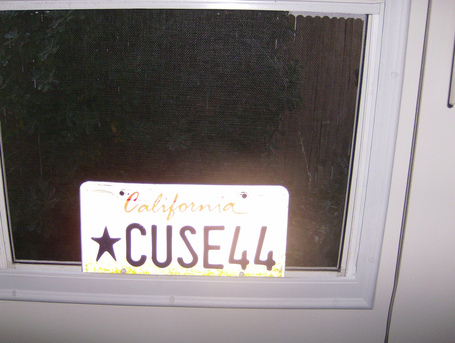