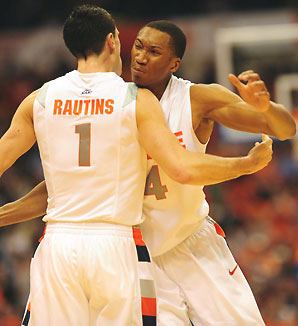 The NBA Draft is about to get underway.  We'll hear Wes Johnson's name pretty soon, though where exactly he'll go remains in question.

As for Andy ,we (and all of Canada) are hopeful.

Leave your pre-, in- and post-draft comments below.  G'Orange!

Update 2: As expected, Wes is a Wolf.  Timberwolf to be specific.  Now, let's see if they keep to the same strategy that's made them so successful and draft five more small forwards.

Update 3: Timberwolves fans seem to be giving Wes the Donovan McNabb/Eagles Treatment.  SU fans should be rooting for Wes to become an All-Star and leave that godforsaken franchise ASAP (along with Jonny).