Saw XII: Oh Yes, There Will Be Revenue Sharing

Share All sharing options for: Saw XII: Oh Yes, There Will Be Revenue Sharing

Big East Commissioner John Marinatto wakes up in a dingy, decrepit bathroom.  He does not remember how he got here or what he's doing here.  There is a CHAIN around his right ankle, connected to the wall.

He looks at the door.  It's bolted SHUT.

Marinatto:  HELLO!?!?  Anyone?  Is someone keeping an eye on Seton Hall's basketball players?  ANYONE? 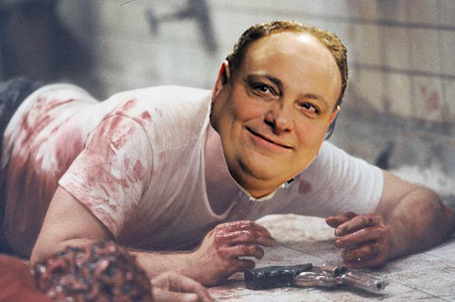 He turns toward the bathroom floor and that's when he noticed them.

FOUR BODIES.  All facing down.  Motionless.  Blood oozing from their heads.

Utterly confused and defeated, he sits down against the wall.  Searching for a cigarette, he smacks his pockets for anything.  That's when he finds it.

A CASSETTE PLAYER.  The words "Press Play" have been written on a piece of tape on the front.  He presses play.

Voice: Hello John.  This is your wake-up call.

Voice: Everyday that you have spent as the commissioner of the Big East Conference you have told anyone that would listen that things are fine. Even though your football conference was mired in parity, lacked a powerhouse program and garnered less respect than the WAC.

Marinatto stops the tape.  Who is this voice?  It sounds familiar.  But he can't place it.

He looks back at the bodies and wonders if these men were in the same position and whether or not his fate will be the same.

Voice: I want to play a game. Here's what happens if you lose. You are chained to the wall and will be unable to release yourself, that is, short of gnawing off your own leg. All I am asking you to do is admit that the Big East waited too long to save itself, that you should have had the foresight to expand years ago or at least get Villanova to move up to D-1 football and that your insistence on protecting the needs of schools like St. John's and Seton Hall over the needs of cash cows like Syracuse, Pitt and West Virginia has doomed your conference.  Simple admit this in the next thirty seconds and I will let you live.  Do it not and you will end up in the same position as your roommates there.  What will it be, John?  Expand or die, make your choice.

John presses the stop button on the tape.

Marinatto: I don't understand...we have a sound business model.

The TICKING of an unseen clock begins.

Marinatto:  The double-bye format was golden, it did wonders for Providence, I don't understand why it didn't work...

Marinatto:  Sure Memphis would bring an influx of cash and a huge desire to compete in ever sport, but....St. John's won some basketball games 20 years ago...so...

Marinatto:  I know Syracuse continues to set attendance records but what do I tell the 6,000 people who show up to see DePaul?

Marinatto:  We have a plan....I hired Tagliabue...people find him trustworthy...no one in Long Island wants to watch Rutgers play Minnesota...AHHHHH FUCK THIS SHIT!!!

Marinatto begins to GNAW at his leg.  TEARING at the flesh.  RIPPING the sinewy muscles. CRACKING the bone with his teeth.

Marinatto has done it.  He has SEVERED HIS OWN LEG.  He is free.

Marinatto:  I did it!  I got free!  I don't need to play your sick game anymore!  I can go back to Rhode Island now where some of the finest doctors in Rhode Island.  And if the ones from Brown aren't available, I guess I can make do with Providence's.

The door's handle begins to MOVE.  Someone is coming.

It's a tiny person...riding a squeaky TRICYCLE. 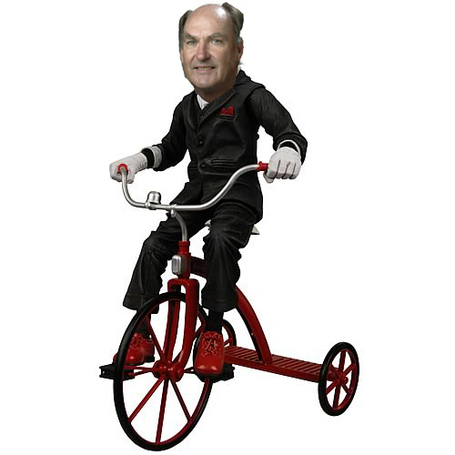 Delany: Because, John.  Up until now, you've simply sat in the shadows watching the other conferences make plans.  You saw the writing on the wall and yet did nothing.  You only stared in bemusement. But what do voyeurs see when they look into the mirror?

Marinatto:  I'll get you for this, Delany.  You'll see.  Wait until I tell the Athletic Directors what you've done.  You really think Syracuse, Rutgers, Pitt and UConn will want anything to do with you once they know how far you're willing to go???

Delany:  Oh yes, John, I think they will.  Because they already have.

Suddenly, John hears a RUSTLING behind him.  Movement.  He turns to face the bodies on the floor and gasps in abject fear and horror.  THEY ARE MOVING.  AND RISING.

Now STANDING, the four men remove the fake blood and gristle from their faces to reveal themselves.

Pernetti:  While you were hiding our in your Newport villa, we were talking.  Planning.  Learning.

Hathaway:  We appreciate everything you do for St. John's, John, but we've actually done something for this conference since 1990.  So...you know...

Marinatto:  But...I was just about to add Central Florida and Memphis.  That would have solved everything!!!

Pederson:  You made your choice.

The foursome descend on Marinatto.  His screams are MUFFLED as they finish what he had already started.  Soon after, the cries stop.

HUGE thanks to Nick Cicero for the photoshop artistry.