Share All sharing options for: The Ro*Tel Big Ten O'Meter Update, May 7th 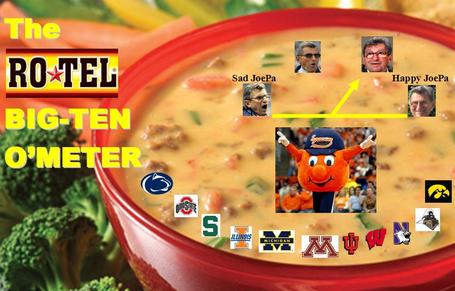 And the arrow moves ever so closer to Happy JoePa since last time.  How so?  Well let's turn it over to Teddy Greenstein, who, after spelling out the reasons SU wouldn't be a good fit for the Big Ten, drops the Cantor Bomb.

On the plus side, Syracuse's chancellor, Nancy Cantor, is said to be pushing to join the Big Ten. She previously served as chancellor for the University of Illinois and provost at Michigan. And if Delany, a basketball guy at his core (he played for Dean Smith at North Carolina), also wants to make the Big Ten a hoops megapower, Syracuse is the way to go.

Otherwise, it's the same old story.  Everyone's got an opinion or heard a rumor.  That is, except Pitt's Wannstache who knows not of what you speak.  Georgetown knows and they're concerned.  Somehow Kentucky's involved themselves in the conversation as well.  There's even chatter of a Big 12/Pac-10 Alliance as college football inches closer to becoming the WWE.