Of Course There Will Be New Football Uniforms In 2010

Share All sharing options for: Of Course There Will Be New Football Uniforms In 2010

DOCTOR Daryl Gross appeared on the Gomez & Dave Show this morning and said what we've pretty much come to expect...Syracuse will have new uniforms for the 2010 football season.  It sounds like, however, this might actually be what everyone wants.  I turn to "orange in veins" for the scoop as he heard the interview:

Gross said this morning on Gomez and Dave that the jerseys will be different this year. No more stripes that were used in the GRob era. He said they're going back to something similar to what McNabb and the boys wore. Pants and helmets will be unchanged.

I took a look back at all those uniforms we created back in our contest and I think I have a pretty decent representation of what we're talking about. (Note: This is not official, only what it will apparently look like based on that description)  The Home Unis courtesy of DanteAmore: 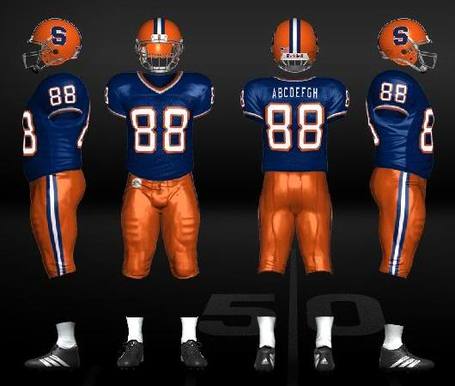 And the Away uniform courtesy of DanteAmore: 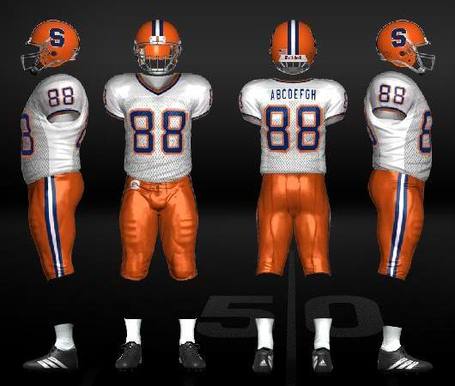 For the record, both uniforms finished fourth in their respective voting categories (Here's the winners as a reminder).  I suppose it could be CuseOrange's winning versions as well if they decide to go with the larger sleeve stripe.

In theory, it all sounds like a step in the right direction.  The retro-y look didn't really fit when it was all said and done and that particular look now has the stink of the Greg Robinson Era on it so it's best to try and re-associate with an era of winning.

(I still say it would be badass to come out as The Syracuse All-Blacks at least once...)