Let's start with this way-cooler-than-MayFest-warrants video of the fine folks who were out this weekend:

And so, MayFest 2010 happened.  After all the worry and the preparation and the threats and the rumor and the mild hysteria...everything went smoothly.  Some folks had fun at the official SU party.  Most folks had fun elsewhere.  Alochol was imbibed.  Food was noshed.  Beer pong was ponged.  Fun was had.  Injuries were kept to a minimum.

That was, when the cops weren't running people over with their cars.

A man on a bicycle and a Syracuse police car collided at the corner of Sumner and Euclid avenues on Friday around 11 a.m.

Aubrey Schmidt, a freshman at the State University of New York College of Environmental Science and Forestry, suffered minor injuries mostly on his legs and chin but was taken to Upstate Medical University Hospital for further examination, said Lt. Richard Shoff of the Syracuse Police Department.

Schmidt only sustained minor injuries, despite not wearing a helmet, because the cop car was nearly stopped at the time of the collision, Shoff said. He suspects Schmidt was in the process of braking as well, Shoff said.

Otherwise, nothing to exciting to report.  When not injuring bicyclists, the cops were just handing out warnings instead of tickets and folks seemed to understand that you can have a good time without running afoul of the law.  All in all there were three arrests made due to noise ordinance violations and to be honest, if you actually did enough to get arrested for that you probably deserved it.

A lot of folks heads down to South Campus to get as far away as they could from the SU sanctioned event. It was there that the most "college" photograph I've seen in a long time was snapped. 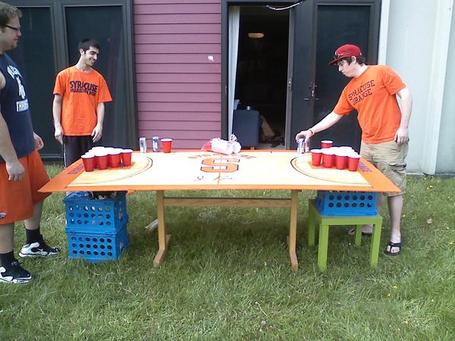 There's even an "after" version of the photo that drives home the message even further.  Good work, everyone.