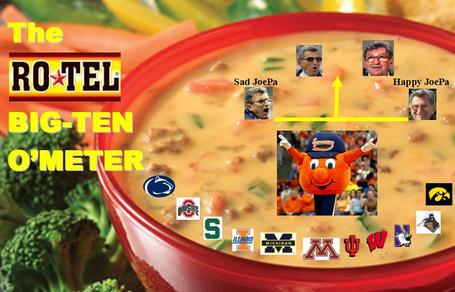 In the grand tradition of The Onion's prescient piece on the ever-expanding razor blade war, I say we follow their lead and just cut to the chase already.  Chuck Landon is brave enough to fire that first missile for everyone.

According to knowledgeable industry sources, the controversial reconfiguration could commence as soon as August.

The key to the shakeup is whether the Big Ten opts to expand to 16 or become a mega-conference with 20 members. The linch-pin is Texas. If the Big Ten can entice Texas to join, it will expand to 20 and become the biggest power-broker in collegiate athletics.

Two things I love about this.

2. "Knowledgeable industry sources."  So much better than "sources with knowledge" or even "multiple sources."  That sounds so much more impressive and will continue to do so even after this is debunked in a few hours.

I think we're all on the same page at this point, right?  That all these things that sources say are nonsense and the truth is probably 100% less interesting than of them.  The Big Ten is still months away from any decision and all this stuff is just someone speculating about someone's speculation on someone else's speculation they overheard at the buffet line.

As for Syracuse, no one at the university is commenting, which is wise.  It's not for a lack of trying, though.

Cantor, a former chancellor at the University of Illinois, has declined several Post-Standard requests to talk about the issue. She was named in a recent Chicago Tribune report that described Cantor as "pushing to join" the Big Ten.

Gross, who will attend the meetings, also has been quiet. He responded a month ago to early reports by saying the Big East schools were well aware of what was going on in the Big Ten.

"The thing we do know is, change occurs, " he said in April. "The best thing you can do is be prepared for it."

And how John Marinatto?  The Big East is having their annual meeting this week and try as he might, the commish can't hide and hope it all goes away.

"To me, sitting in the seat that I (sit in), it's just irresponsible and inappropriate to speculate, and speculate on other people's speculation, to feed into that frenzy."

"It was be irresponsible not to be concerned about it. We're trying to position ourselves as best we can. In my mind, you always play out what it is you might do, but we certainly can't do that in a public forum. (It would be) even more irresponsible of me to bring in other players to the situation in a public way."