Share All sharing options for: The Ro*Tel Big Ten O'Meter Update - Rumor-Monger Away! 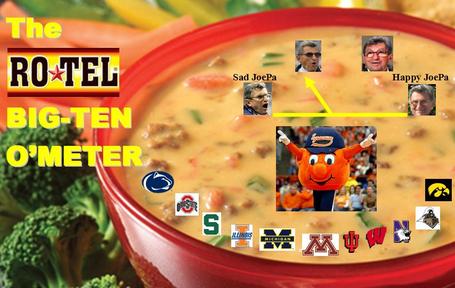 If you want someone to blame for all the Big Ten rumors and chatter you're already sick of, don't blame bloggers.  We're basically the ONLY group left that hasn't thrown caution to the wind and just announced unsubstantiated rumor as fact.  Between random Midwest TV stations, random Midwest radio stations and random Midwest reporters, every day is new day to learn that BIG TEN EXPANSION IS HAPPENING RIGHT NOW AND EVERYTHING HAS BEEN DECIDED.

I like Tom Dienhart's style the most.  Tom is a listener. And he hears a lot stuff.

May 13th - Latest Big Ten expansion buzz I hear has the league looking at Texas, Maryland and Vandy while also focusing on Texas A&M and Virginia.

Tomorrow Tom will hear that the Big Ten expansion buzz has the conference focusing on Sam Houston State, the San Jose Sharks and a ham sandwich. So that'll be fun.

In the meantime, about the only factual thing we do know for reals is that the Big Ten meeting are happening.  And that's it.  Jim Delany says a decision is months away...and that's assuming the conference even does expand (it will).

"We may not expand, we may," Delany said. "If we do, it will be the result of a very thorough set of studies that touch on competitive aspects, the educational fit and it would have to be fiscally sound."

In the meantime, Syracuse sits and waits.  It's been a while since we've heard a solid lead that makes SU sound like a viable expansion candidate so we'll keep the meter running low.  What should probably concern SU fans more is the fact that, if the Orange get passed over by the Big Ten, they might be left with no other option than to ride it out in the Big East. That might be fine if the Big Ten plucks only one school.  But what if they grab Rutgers, Pitt and UConn?

The ACC just locked down a new TV deal for football and basketball with ESPN.  The financial terms of the deal are set, so the 12 teams in the conference know exactly what kind of cut they're getting.  If the ACC decided to expand to 14 teams, the financial terms on that deal probably wouldn't go up, which means the 12 conference members would lose shares of TV revenue.  I highly doubt they'd be cool with that.