Adam Sandler Is Dead To Us

Share All sharing options for: Adam Sandler Is Dead To Us

Say what you will of the Adam Sandler oeuvre but for Syracuse fans, we'll always hold a special place in our heart for Big Daddy, the 2nd-best Syracuse-related movie of all time.  Pretty much the entire movie, Sandler and his co-stars are wearing Cuse shirts and almost all of the characters attended Syracuse.  The film irrevocably linked Sandler and Syracuse for years to come.

Sandler's got anew movie called Grown Ups coming out soon.  You've seen the commercials and been underwhelmed by the jokes already (Rob Schneider inappropriately kisses an old lady!  Genius!).  Just in case you need a synopsis, here you go:

The movie, a comedy, is about five friends and former teammates who reunite in a fictitious Connecticut town 30 years after graduating from high school to honor the passing of their childhood basketball coach.

Seems gentile enough.  But there's that part about Connecticut.  That's troublesome.  Want to know what's even more troublesome?  It appears that his character sports a UConn hat in the film: 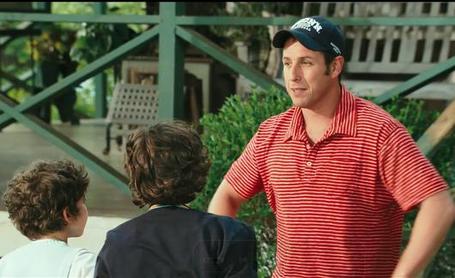 Tough to be 100% sure because there's never a head-on shot of the hat, most certainly because Sandler wants to mitigate the embarrassment. But if you put two and two together, it's pretty likely.  And sad.

It goes without saying that Syracuse fans will now be boycotting this movie.  I'm also working under the assumption that you wouldn't spend $13.50 to go see this in theaters regardless.  So, my hope is that nothing's changed, really.

And so, if you want to join me tonight, I'm going to hold a DVD-burning Rally down by the old abandoned warehouse.  Bring your Big Daddy DVDs (or VHS tapes, if you're "that guy").  We'll lit the fire and send those bargain bin discs straight to hell.  And Adam Sandler can join them there.

(Oh, bring any copies of Catcher In The Rye, too.  That book is SINFUL.)