For the first time since we've started, the O'Meter is taking a huge step back towards sad JoePa: 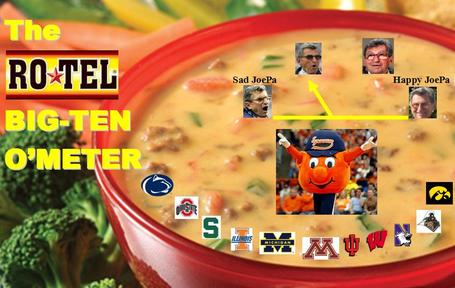 The truth is, while yesterday's unsubstantiated rumors are merely that...there's a kernal of believability to them.  That really does sound like the kind of plan the Big Ten would put together.  And if that's the case, that leaves SU on the outside looking in.  Again.

How should Syracuse fans feel about the possibility they will once again be the bridesmaid and not the bride?  Not sure.  Lets say this plays out as its explained and Notre Dame does not accept but everyone else does.  The Big Ten goes 14, the Big East loses Rutgers and replaces them with...someone.  Life goes on, at least for a little while.  If the ACC follows suit and expands to 14, I'm not so sure Syracuse is one of those two teams.  Louisville, West Virginia or South Florida might make better geographical sense.  And then if that's the case...oh shit.

But..we're getting way ahead of ourselves.Best to just head on over to Pitt Blather and read the Big Ten Expansion Q&A that myself and Jon from On The Banks joined in on.

In the meantime, I think it's fair to say a pattern has emerged.

INSERT MIDWESTERN RADIO STATION, citing UNNAMED/MULTIPLE/CREDIBLE sources, is reporting that SCHOOL(S) has been officially invited to join in the Big Ten.

The fun question now is, where will the next one come from?  Here's my guesses: