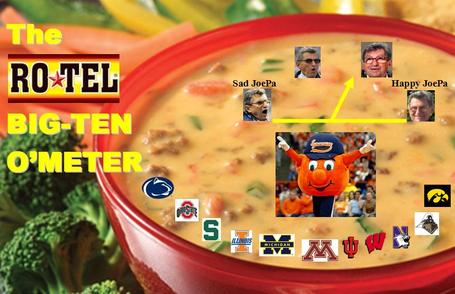 Clearly the best rumor so far is Tom Dienhart's plan to bring Mizzou, Nebraska, Pitt, Rutgers and Syracuse to the Big Ten and split the mega-conference up into four divisions like it was the NFC.

You might have heard it's a "done deal" per ESPN that Missouri has been invited to join the Big Ten.  Of course, that was actually as much of a "done deal" as the UConn "done deal" from last week.

Speaking of UConn, Randy Edsall has now gone on record as to saying that multiple coaches within the Big East are asking the conference to give Notre Dame a final ultimatum, one that everyone knows they will reject.

Everybody loves Rutgers, it seems.  That is, except for Paul Tagliabue, the guy trying to keep Rutgers in the Big East by any means possible, which includes trashing the school's Northeastern appeal.  Great way to fire Rutgers up...even if its in the opposite direction.

If teams do leave, the idea of expansion will have to be explored if the conference wants to survive.  Rick Pitino is the first coach to make a case for adding UCF to the Big East mix.  USF wouldn't be huge fans of that but then again they might not have a choice.

Aside from Boeheim (who hates the idea, obviously), no one else at Syracuse is talking.  And that's probably for the best.  There so much hearsay and rumor out there right now, to comment on something that's probably not true or only half-true just makes you look foolish when it doesn't happen.

And now my head hurts...