The Lesson Is...Don't Get Punched By Delone Carter

Share All sharing options for: The Lesson Is...Don't Get Punched By Delone Carter 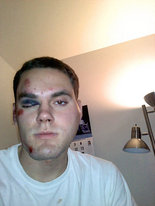 Courtesy of the Post-Standard, that's William Hotaling the day after he was allegedly one-timed by Delone Carter.

First of all...OW (here's what William looks like on better days).

I know we're supposed to take the wait and see approach on all of this but the more I think about it the more I feel like this will not end well for DC3.  And that was before I saw the photo.

Carter's got a mighty gauntlet he needs to run through and I'm not sure it's possible to come out the other end unscathed.  First, he's got the police and the City of Syracuse.  As John over at Orange44 explained, chances are DC3 will end up with a fine and restitution if he's lucky.  That's the easy part.

Next up is the SU Judicial Board, which as we know from experience, can be a little "obtuse" in their decision-making process.  Since this is student-on-student violence, I can't imagine they go too easy on Delone.  If true, the repercussions of what he did are worse than what Devo did (gender-aside).

THEN, Carter has to answer to Doug Marrone.  The man who has accountability and self-respect practically tattooed on each and every player that walks through the door.  The guy who holds the label of "Syracuse football player" so high that he openly despises the idea of anyone who would besmirch it.  He will not be pleased.  Assuming he's still a student at SU, Marrone will suspend DC3 for sure.  How many games and for how long...we'll have to see.  Guys have been suspended for a game for much less...don't know where assault on a fellow student falls on the Marrone Terror Alert (red, I'm sure).

And it probably is worth saying, if Hotaling is telling the truth, let's not hate on the guy (until we find out he's not...).  If that was you, and a stranger did that to your face (or your kid's face) over something you didn't do, you'd probably do the same thing he's doing.