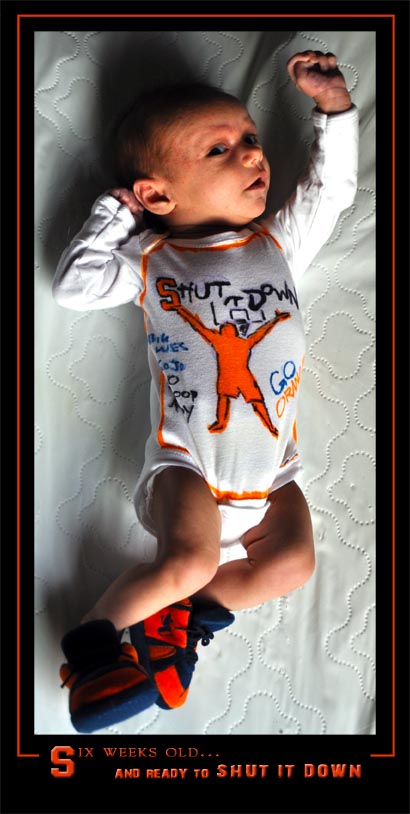 A CNY hoops brotherhood: Why SU fans should root for Cornell : Sports : WSTM NBC3
There's plenty of solid reasons to root for Cornell on Thursday. Here's one reason you might not of thought of. It could help kick-start a real-deal rivalry with Syracuse.

Salt City to Salt Lake - Something's in the air : Sports : WSTM NBC3
It's been four days and thousands of miles of travel since the Orange beat Gonzaga in Buffalo, but the Syracuse University men's basketball team still had that same determined look in their eyes when we spoke to them before practice Wednesday at EnergySolutions Arena.

Le Moyne still riding high of beating SU : Sports : WSTM NBC3
"It's just been a tremendous recruiting tool," McAuliff said. "You never know where the Le Moyne name is going to turn up."

Go ‘Cuse Typography | current stressdesign
If you're going to root for 'Cuse, be accurate.

Three Idiots on Sports: Pat Forde Strikes Again
"And then there is Syracuse, which put 35,000 fans in the Carrier Dome for a game this season. Who can root for a team that does that? Its coach last smiled in a game in 1978, but the video evidence of that has been destroyed."

Orange Fizz: Syracuse Orange Sports Blog, Recruiting and Podcasts.
"The way they play defense, they're on that level. If they fall short of the Final Four, you really can't justify the season, because they're a Final Four team." Uh, great. Thanks Laz.

Orange::44: All the Help We Can Get
Those socks are magical socks, my friend. As Orange::44 is in the midst of a birthday celebration this month, I figured I would take this rather timely opportunity to tell not only a great Syracuse Basketball NCAA Tourney story, but one that pertains to Orange::44 founder Matt Glaude.

A word to the wise: Enjoy Wesley Johnson while we've got him, which won't be long now |
"That may be the case, but I’m not thinking like that," Johnson said at Energy Solutions Arena, the spiffy home of the Utah Jazz, Wednesday afternoon. "I have confidence in the team and in myself. I just don’t see us losing. Honestly. I won’t think about my last game until Indianapolis."

Syracuse's commitment to defense could be ticket to Final Four - Stewart Mandel - SI.com
"The way they play defense, they're on that level," said '96 point guard Lazarus Sims, now the team's coordinator of player development. "If they fall short of the Final Four, you really can't justify the season, because they're a Final Four team."

Sweet 16 Bracket Breakdown: Objectively Ranking The Remaining Tourney Teams - SB Nation
While Wes Johnson stole all the headlines after his epic shooting display propelled Syracuse past Gonzaga, and the status of Arinze Onuaku's gimpy leg has worried the Orange faithful, Andy Rautins remains the key for Syracuse. When Rautins is on, hitting an often ridiculous assortment of high-degree-of-difficulty three-pointers, Syracuse is borderline unguardable.

2010 Sweet Sixteen - CollegeHoops.net
Using pictures from CHN's Cheerleader of the Day series, we match up cheerleaders from each Sweet Sixteen team against each other to create a mythical tournament. Basketball and cheerleaders: A perfect combination.