Before Wes Goes, Win A T-Shirt!

Share All sharing options for: Before Wes Goes, Win A T-Shirt!

From here on out, Wes Johnson needs to step up and lead the Orange if they want any chance of making it to the Final Four.  Now, the flip side to that is of course, as his reputation grows so does his draft stock.  That means the chances of Wes coming back for another season are between slim, none and negative-eleventy-billion.

That said...it can't hurt to try and persuade him.  and the best way for persuading someone to your cause?  T-SHIRTS!!! 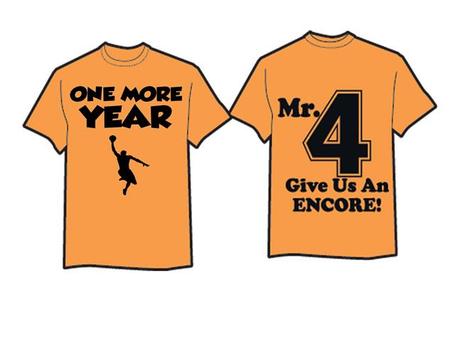 Cuse Cutoffs was kind enough to offer up four One More Year t-shirts for the Butler game.  To win one, all you need to do is correctly guess...

HOW MANY POINTS, REBOUNDS AND BLOCKS WILL WES JOHNSON HAVE AGAINST BUTLER?

I'm looking for one aggregate number.  Enter that in the comments along with the tie-breaker (How many points will SU score). When it's all said and done we'll pick the four winners and send out some T's.  Contest closes at tip-off.

If you're interested in purchasing one of the shirts in the meantime, head on over to Cuse Cutoffs (Hurry!  Supplies are extremely limited!)