Share All sharing options for: Do Your Part...Prevent Further Chipotle-Related Disasters

Syracuse has won 30 games when Chiptole was not consumed in mass quantities the days before a game.

Syracuse is winless every time they have gorged on naturally-raised pork and barbacoa which has been marinated for hours in one of Chipotle's many establishments.

We got lucky in Buffalo, there were no Chipotle's nearby.  However, SLC is a different story.  There's four well within driving distance to the arena.  I don't blame the guys and their inability to reject the fresh, natural ingredients that await inside those doors.  I've done everything I can to help, attempting to curry favor with the Gods.  But I'm putting the rest of this on you, Syracuse fans who will be in Salt Lake City this week.  You need to step it up and help prevent a disaster.

Sure, I could ask you to form a human chain around each Chipotle but that's just not an efficient usage of our time.  Plus, I'm sure you want to go sight-seeing at some point.  Instead, I'm asking for one simple favor.  It's a small gesture but it will make an immense impact towards saving our team, our season and our sanity.

I want you to head to the nearest Chipotle to your hotel and hand out the below flyer to every employee.  Hell, even hand it to the customers.  Just in case. 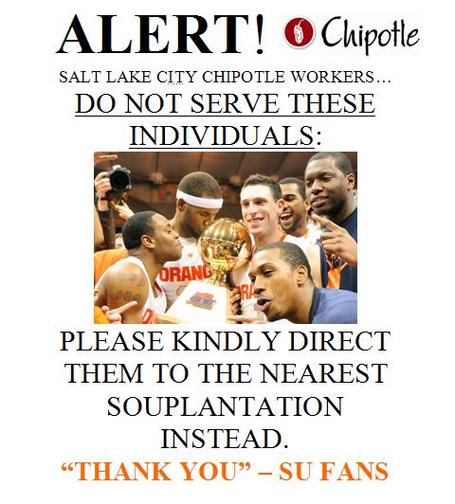 Do your part, SU fans.