Syracuse Uniforms Going Back To Non-Basics?

Share All sharing options for: Syracuse Uniforms Going Back To Non-Basics?

The New Uniform Doomsday Clock has been pushed up to 11:55.  It looks as though we've found the hidden weapons of mass good-mojo destruction.  If what's going on at Texas is any indicator, the Orange are likely to follow.

We saw the dotted shorts last week and wonders where they came from and what they had to do with anything.  Now comes the reveal of Texas' new uniform, which were debuted last night in the loss to Kansas.  The loss can 100% be blamed on the fact that Texas changed uniforms and nothing else.  Despite being "70 percent lighter than the old ones," Texas is win-less in them.  This is fact.

Now what should draw your attention is the shorts.  That same dotted pattern on the sides is what we saw on those random Cuse shorts.  It's not hard to make the leap that you're looking at the design that will be unveiled by the Orange extremely soon.

So if we assume that the Orange coming out with a very similar look soon, we have to then ponder what in God's name is going on here: 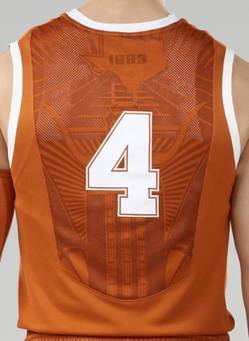 So that's happening.  And since the imagery is extremely school specific, we now can begin the speculation process of what images will be included in SU's version.  Knowing DOC Gross' affinity for the Big Apple, I think we can all agree that the school from Onondaga County will most likely feature the Empire State Building.  Possibly overlooking the Dome, as God intended.  Couple that with the block S up top and I'd put good money down on that.

How it all translates, well, I guess we'll find out soon.  Possibly even Wednesday.  Of course, we can also hope that commenter kracatoan is on to something about the back design...

I think we can all agree that would be the best option of all.