Share All sharing options for: Final Preparation For Syracuse-Villanova

Cuse Nation acquited itself quite well on Gameday this morning.  "Only" 7K in the building but as someone pointed out, that's still more than 50% of the student population.  Not too shabby.

Plenty of Big Heads in the crowd.  Most of which were easily recognizable.  One in particular over Digger Phelps shoulder...not so much.  If you're wondering, that's Asst. Equipment Manager Dan Schworles.

Some final news, notes, videos and thoughts before hell is unleashed. 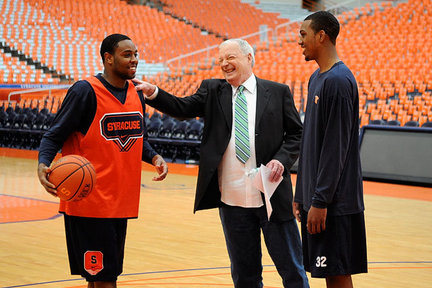