Share All sharing options for: If You Can't Beat'm, Punch'm

When Syracuse and UConn play one another in women's basketball the Huskies have usually wrapped up the "who's going to win?" question fairly early on.  It's the other question..."what's going to happen?," that you have to stick around and wait for.

In the past we've seen things get chippy, frisky and downright accusatory.  Remember GenoTripGate?  In Wednesday's 87-66 UConn win, things got a little bit chippier and friskier.

With 12 minutes remaining in the 2nd half and UConn well on it's way to victory, a scrum developed on the court.  Then, things got kerfuffly:

With the Huskies holding a comfortable 21-point advantage, the referees went to the monitor after the affair. Both going for the ball, Morrow and Hayes appeared to bang heads. Shortly thereafter, Morrow appeared to take a swing at Hayes. And the refs saw enough to throw Morrow out of the game for fighting.

"It's just one of those things where she's a competitor," Hillsman said. "When you play as hard as she plays, and she brings it every night, at some point you finally let things simmer."

Well SIMMA DOWN NAW! (hooray for 90's SNL references!)  You can watch the punch in these highlights.  For his part, Auriemma said he didn't even see the play (though I'm sure he'll change his tune during his radio program in a couple days).

Morrow didn't comment but Hayes did have this to say:

Hayes described the scramble for the ball after the game, claiming Morrow’s head hit her flush in the face and split her lip. The UConn bench saw Morrow swing. "I guess she thought I did it on purpose, so she took a swing at me, my teammates said," explained Hayes. "I was already leaning back from the hit in the head, so she missed."

SU Chancellor Nancy Cantor was on-hand for the game.  I wonder how she felt about the play. 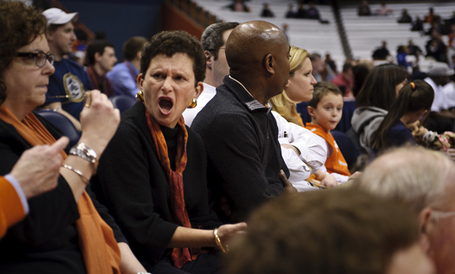