Andy Rautins Wins You A T-Shirt

Share All sharing options for: Andy Rautins Wins You A T-Shirt

Well, six of you at least.

Andy Rautins took over for Kyra Sedgewick last night in the role of The Closer.  He'll be filling in from time to time, when the situation calls for it.  Which, judging by the way things have been going...could be often.

In order to win one of the six Beat Nova shirts up for grabs, I asked you to guess who would score the final points of last night's game.  It was indeed Andy and 30 of you guessed that Leo's son would be the one to do it.  (Kudos to the one person who guessed DaShonte Riley...you had a shot.).

So it comes down to the tie-breaker as usual (total points) and our secondary tie-breaker (time of entry) and thanks to both of them, we have our six winners:

Congrats winners, e-mail me your address and shirt size and we'll get those out ASAP.  And if you'd like to buy the shirt, by all means please do. 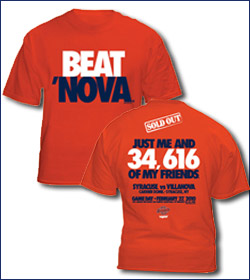