Lots of post-game nuggets to unearth.  First, gotta love this photo of Kris Joseph giving the Georgetown student section a salute.  Is it a kiss-off?  Is it a "good game, bros and bro-ettes"?  Who's to say?  Nice Carmelo jersey, guy. (via media.syracuse.com) 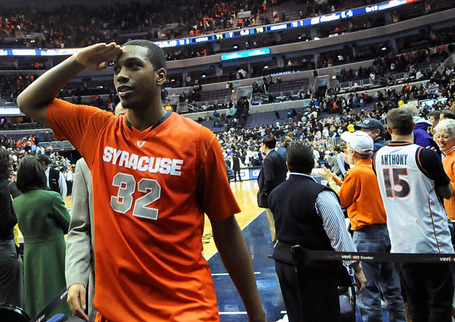 But it was the fans celebration that needs to be noted today.  First up, there were plenty of bets and comeuppances sorted out last evening.  We're waiting on Casual Hoya's Ode To Gerry.  In the meantime, how bout one Syracuse fan's plight to "Otto the crap out of her officemate's cubicle." 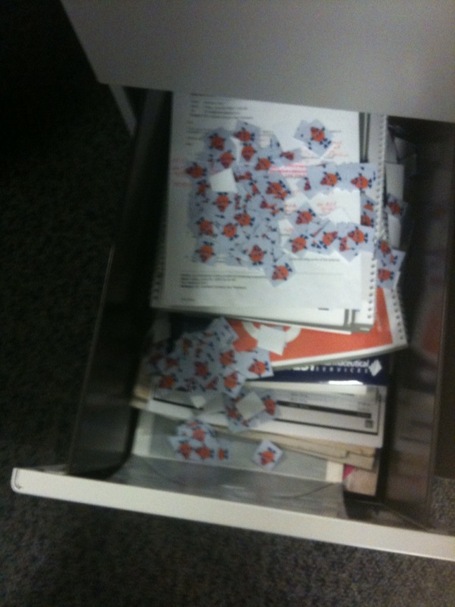 That's just sound work right there.  As for the fans in D.C. last night, they got their celebration on after the game.  These fellas turned their good mood into a little extra cash by putting on a show on the Metro: 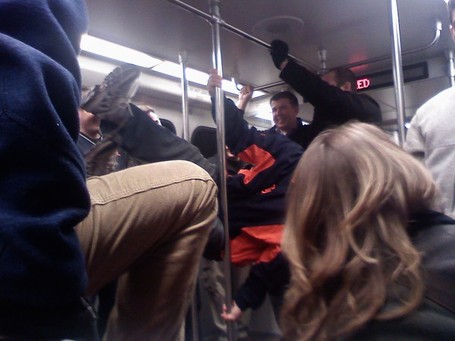 Cuse fans certainly got their celebration on, but did we get too much of a celebration on?  That brings me to this post from a Georgetown fan, decrying Syracuse fans to be "atrocious" and "subhuman."  Oh brother, here we go:

...this is by far the most classless fan base in the BIG EAST and possibly in the country, including "grown men" who have sworn at my mother during SU-GU games.  And this disgusting lack of class was absolutely proven last night, in spades.

Alright.  I'm sure this rant has nothing to do with the fact that Syracuse has defeated your team twice this season, including a beating in your own building last night, but...continue...

Like the Syracuse fan in a luxury box who was jawing back and forth with a Georgetown young alum that was heading out of Section 118, and decided that it was appropriate to throw a full cup of Coke on the GU fan’s sweatshirt.  My wife and I watched as it happened, and wondered what could have possibly been said to make the Cuse fan decide to do that.  As we were about to find out, not much at all…

That said, if the culminating event happened the way you say it happened, then I assure you, I ASSURE YOU, it was not an unprovoked coke-dumping.  I do not condone dumping cola onto other people's sweatshirt and if a Syracuse fan did that I hope they were dealt with by security (and if they weren't, your security is almost as bad as your basketball team).  But people don't just arbitrarily dump soft drinks on strangers.  They don't.  They don't do it to be whimsical.  They don't do it as some form of performance art.  They don't do it cause they're "subhuman."  They do it because the dumpee did something to provoke it.  Maybe the Syracuse fan started it.  Maybe not.  But to say that the event was 100% without provocation is naive.  I'm not condoning, I'm just sayin'.

Barely a minute later, as we were exiting section 119 and about to head onto the concourse, a mousy brunette in a Syracuse tee shirt and grey North Face jacket reached up and dumped her half-full beer on my head and my winter coat, then immediately started weaving her way to escape through the crowd and pointedly ignoring my "excuse me’s" and taps on the shoulder. Not wanting to be charged with assault myself, I didn’t physically try to stop her and she escaped through the crowd. Now as to the question of what it takes to launch a Cuse fan into committing assault — apparently Liz and my discussion of whether we should take the bus or the metro home was enough to send this girl over the edge.

Again, not denying that what you're saying actually happened.  But given your mental state at the time (already bothered by anything a SU fan does or says) and the possibly inebriated state of the SU fan, I think we can also put out the possibility that this Syracuse fan was actually a clumsy, inconsiderate oaf in a rush rather than a menacing, walking-atrocity with no regard for life and a taste for human flesh.  Not to say it's not possible...like I said there are assholes in orange, but, it just sounds like if a Syracuse fan stepped on your foot at this point, you'd turn it into first-degree assault.

This is to say nothing of the crowd of meatheads outside the arena yelling "F—- Georgetown! F—- UConn! F—- the BIG EAST!!!"  Nothing like family-friendly entertainment. (on a side note, strange they would mention two teams against whom the Orange blew huge leads but hung on for the win, helped in part by questionable officiating—late vs UConn, and early against the Hoyas—but that’s neither here nor there).

Strange that Syracuse fans would mention two teams they are 3-0 against this season?  Nope.  Not at all.

Or finally, as we walked home, the Syracuse fan who decided that the side of a building on 15th Street was an appropriate place to urinate.   Stay classy, Syracuse.!

No Georgetown fan has ever peed on the side of a building.  Never.  Impossible.  They are beacons of morality and justice. They take pills for that sort of thing.

Now, on some level, I’ve always known that Syracuse fans are awful.

Well at least we know your account isn't biased.

Georgetown rivalry aside, they are generally recognized as the most obnoxious at the BIG EAST Tournament—an impressive feat considering WVU fans are there, too.

Generally-recognized by who?  Who is keeping track of this?  Do Syracuse fans throw items onto the court during the game?  Not that I recall, Senator.

So this message is for my friends and current and former colleagues, and any other of the small number of individuals who somehow survived four years in that frozen hellhole, yet managed to avoid becoming total a-holes… you ought to be ashamed of your team, your school, and your fellow alumni.

You cited a handful of Syracuse fans in your diatribe.  Yet there were thousands of Syracuse fans on hand in the Verizon Center (which you should be embarrassed about, if you ask me.  No way would Syracuse fans ever let a Georgetown cheer take over the Dome).  So you're talking about, let's say, 1% of the SU fans in the building.  What about the vast majority of Syracuse fans who were on hand, cheered wildly for their team and then went about their business without incident?  Maybe some of them celebrated afterward...is that so terrible?

Would Georgetown fans politely decline to celebrate had they won the game?  Would Georgetown fans have all quietly left the building, got in their cars or on the Metro, gone home, made some coffee and gone to sleep without even a hint of excitement, celebration or cheering?  Come on now.

I feel bad about all of the liquid-dumping.  That's not cool.  And if it was indeed on purpose, as you say, then I will be the first to stand up and say shame on those Syracuse fans.  I don't condone physical attacks on rival fans and I don't condone wanton destruction of their property.

However, Syracuse fans are not monsters.

We're all the same fans, just wearing different clothing.  Some of us are jerks.  Most of us are normal people.  Like, 99% of us. If we're ever in DC or Syracuse together, I'll buy you a beer and we'll have a great time.  And I promise I won't dump it on you.  Unless you deserve it...