On New Uniforms And Jail

Share All sharing options for: On New Uniforms And Jail

Obviously, this is the best quote so far on the new Nike uniforms, courtesy of Arinze Onuaku.  Actually, they're in reference to the new warm-ups, pictured to the right.

"The warm-ups?You know when you go to jail and they put you in the inmate uniforms? That’s what they look like."

My initial thought on the unis was that I was fine with them.  All things considered, it could have been a lot worse.  After having a chance to see them in action, there's a couple thoughts I have that have softened my stance a little bit.

First, we have to talk about the gray numbers.  We're fans, which by nature means we are fanatical, which means that we can sometimes be irrational.  We make grand proclamations and biting, sweeping remarks about jerseys and designs and logos.  We either love them or hate them.  And we make that known.  And we usually make it known in regards to this "gray creep" that's worked it way onto the uniforms in ways that make it hard to take it constructively.

That said I honestly believe that, if you were to get 100 rational, free-thinking Syracuse die-hards in a room and ask them for a lucid, honest opinion, 97 of them would tell you they hate the gray numbers. Hate them.  Not only robs the jersey of depth but also lessens the impact of the blue, which is the preferred second color by those 97 (possibly all 100).  Considering these are the same people that are most likely to throw down hard-earned money to purchase a jersey of their own, it just seems at odds with common sense.

Maybe there is market research telling me I'm wrong and, if so, I'd love to see it.  But until then, I'd wager any amount of money I'm right.

Second, the wiastband.  Now that I've seen it in action...meh.  I remember when I was on the Carl Sandberg Middle School basketball team.  We had just received brand new uniforms to wear and the school was giving away old iterations.  The pile of old uniforms they brought out was the most dated and cornball collection of basketball uniforms I'd ever seen.  Most of them had large waistbands that stood out, just like the ones of the new uniforms.

That's what it makes me think of.  70's or 80's basketball.  A little goofy, to be honest.  I'd be much happier with just white all the way from the shoulders to the knees.  It just looks...cheesy (but I do like the neckband, so that's something...right?)

Finally, the back logo.  Honestly, it's fine. It seems harmless.  Mostly because, if you didn't know what was there...you never would.  No one who isn't intimately aware of Syracuse University's iconography will watch the game and be able to tell what's going on.  Not that that's a reason to lose it.  It's just means it's...not a big deal. 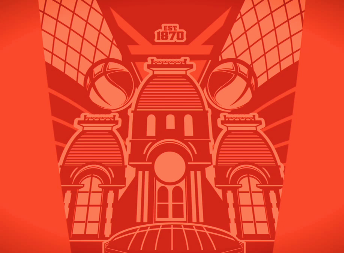 I do like that it kinda looks like Darth Vader, though.  Can we just swap this out and make it Darth Vader for real?

In conclusion, they're not that bad.  I think we can all live with them.  But I'd just really love to know the justification for the gray numbers.  I don't get that.