I believe this is what the kids call "an exclusive." 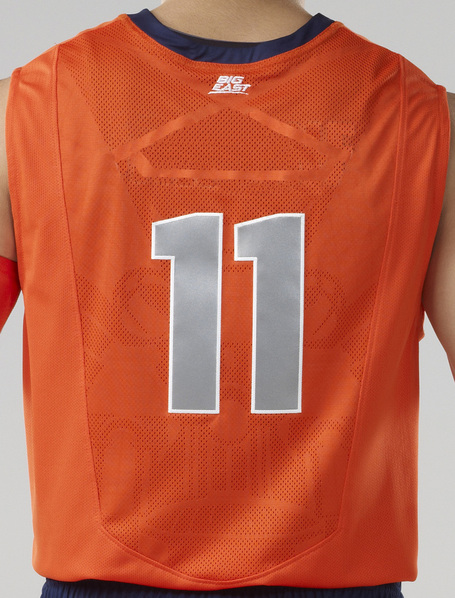 I don't know who that guy is, but he looked PISSED!  Details after the jump...

From the press release...

Paying tribute to the rich history of Syracuse basketball, Nike designers worked with the university to create a distinctive look for the Orange. Inspired in part by the iconic Carrier Dome, the Syracuse jerseys feature a rendition of the venue where some of the programs most memorable games have taken place.

The Syracuse Hall of Languages, one of the oldest buildings on campus, as well as the Syracuse Carnegie Library is featured in the design of the new jerseys. The establishment date of the university, 1870, helps complete the design.

Syracuse’s new uniforms incorporate several Nike innovations that were originally introduced in Beijing. The Hyper Elite uniforms take advantage of Nike Aerographics - an engineered mesh providing zoned cooling that reduces up to half the yarn, making the uniforms more lightweight and breathable.

Nike made specific adjustments to the jersey, eliminating 13 inches of material, while the use of Dri-FIT woven fabric in the short reduced its weight to make it Nike’s lightest ever.

UConn is also apparantly debuting some new unis tonight.  It's fun for everyone!

Initial thoughts....I like it.  Orange and blue stand out, which is a huge plus over the previous orange and gray tones.  That design on the back isn't overly distracting.  Wish the numbers were blue, but, we seem locked in to this gray thing so that. The Cuse thing at the waist kinda looks like a mini-championship belt, which, I'm all for.  My concern is more for the white jersey, which probably highlights the gray over the blue.  All in all, I think we're in the clear here.  Approved.