"Return Of The Marathon Men" Contest

Share All sharing options for: "Return Of The Marathon Men" Contest

Tonight's game between Syracuse and UConn will be the first since SixOvertimes.com, the game that is required by law to be described as "epic."

It's also a game that spawned one of the most memorable t-shirts in recent SU lore.  The Marathon Men shirt. You probably remember the orange one but what if I told you there was one available in navy blue???  (Oddly, gray not available...) 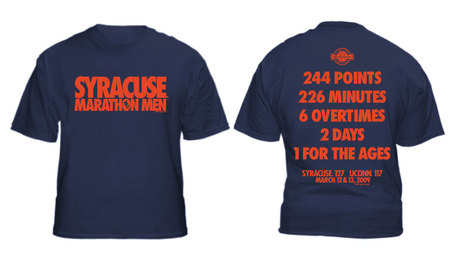 I've got six navy Marathon Men T-shirts that need a new home.  You want one?  All you need to do is answer one very simple question...

HOW MANY POINTS WILL SYRACUSE SCORE AGAINST UCONN?

That's it.  Simple question, simple answer.  Leave it below in the comments before tip-off and you're set.  Also include your guess for the total points scored in the game by both teams as we'll use that as the tie-breaker.

You can also buy the shirt at the SU Bookstore if you like.