Anytime Syracuse wins a big game like last night's, we look to the big sports sites to see how they feature it. The photo of ESPN.com did not disappoint: 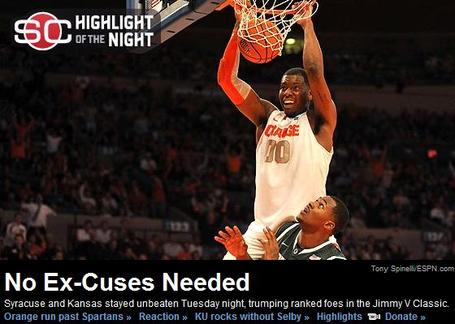 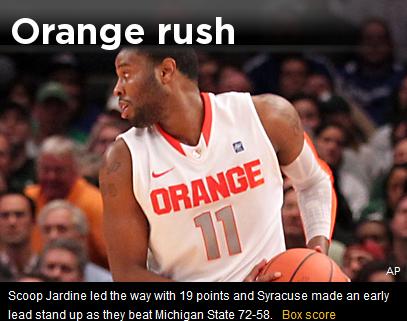 And we can't go too far without taking a moment to watch Jim Boeheim instructing his young players with positive reinforcement and kind words:

Here's all the highlights your body craves...

Andy Rautins & His Peacoat, stylin' and profilin' (via media.syracuse.com) 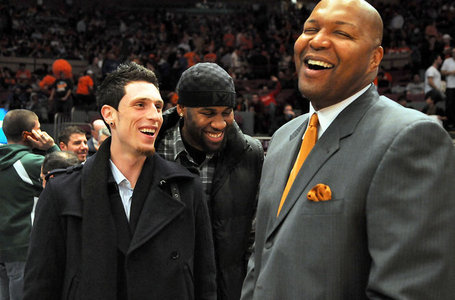 By the way that was great to see The Zohan out supporting the Orange (pictured here to Derrick's left): 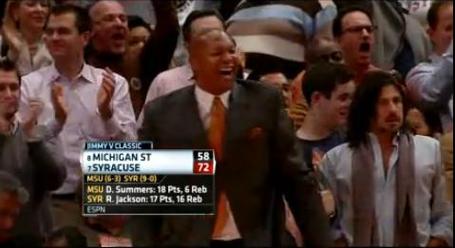 Orange::44: Michigan State - Syracuse Postgame Reactions OR Down Goes Sparty. Again.
Easily the biggest test to date, Syracuse had barely been doing what was necessary to win. Offense is the big mystery as Syracuse has disappeared for large portions this season. And yes, they did a bit on the floor of Madison Square Garden. But in the end this was a huge win and Syracuse did it by bringing the ball inside. Sorry Sparty. That's four in a row for the Orange.

State-ment: Syracuse basketball dominates No. 7 Michigan State | syracuse.com
"We surprised y’all tonight, though,’’ Jardine said, his grin spreading from ear to ear. "We did, didn’t we? We really surprised y’all. I know. I read it.’’

Boeheim, SU vets laud contributions of 4 freshmen in win - The Daily Orange - Sports
"I thought C.J. was great in the first half," Boeheim said. "I thought Baye was tremendous. Dion had a big shot. Fab was good, and he is getting better. He is more active."

It felt a bit like a heavyweight bout at the Garden on Tuesday, and in the end SU was still standing | syracuse.com
"I’ll tell you, the first half especially, we played as well defensively as we can play," the Syracuse coach said after the grind of a game had finally ended in those 16 minutes before midnight. "We were really good on the defensive end. And, offensively, we had really good movement a few times and got the ball in really good places. . . . This was a good win for us."

Rick Jackson continues his dominating streak of double-doubles against Michigan State | syracuse.com
What transpired after that prompted Spartans coach Tom Izzo to proclaim of Jackson, "He totally kicked our butt all night long."

Syracuse freshmen savor the Garden atmosphere; help Orange defeat Michigan State | syracuse.com
"When I was getting in," Keita said, "I was playing smart and just trying to stay out of trouble."

KO'd at the Garden - Syracuse 72, MSU 58 - The Only Colors
Syracuse dominated MSU in every aspect of Tuesday night's game, cruising to a 14-point win in what was probably the Spartans worst game since last season's debacle at the Kohl Center against Wisconsin. The Orange dominated the first half in the paint and managed to push the margin even further in the second half after withstanding a 13-3 MSU run that brought it to within 2.

After Garden State-ment, Syracuse Is Ready to Rise -- NCAABB FanHouse
Just like that, the three-point wins over the Tribe and the Yellow Jackets don't look as troubling. Consider them great preparation for what will be another grueling Big East run.

Michigan State's Tom Izzo vents frustration over Delvon Roe's play: He's got to grow up | MLive.com
"So Delvon’s got to grow up. He’s healthy. I was not pleased with his play. Not very often am I calling out players, I usually call out a team. But our inside guys need some work. We are just not very tough in there. That has been a trademark of our team and our program, and we’ll get that back."

Tom Izzo calls MSU's loss to Syracuse 'embarrassing' | freep.com | Detroit Free Press
"We’ve turned into a pretty-boy, jump-shooting team instead of a blue-collar, fist-fighting team," he said "That was as about as disappointing a performance as we’ve had in a long time."

We were all wrong - Cuse Country
Here is your stat of the game. Not the rebounding margin, or the 76% free throw shooting. Here it is: Syracuse three-point attempts: 11 (out of 54 field goal attempts)