Earlier today we found out that there's a strong, underground movement in Africa to build up the Syracuse fanbase.

Syracuse has taken over New York City with Times Square displays, taxi cab banners, subway ads and lit-up buildings. SU wants to apply much of the same techniques to Africa but isn't sure where to begin.

That's where you, our expert panel on African Advertising Opportunities, come in. We need to see some mock-ups of what Syracuse ads and promos in Africa would look like for the campaign. As you know, the bigger, the better.

For example (via Alex. O) 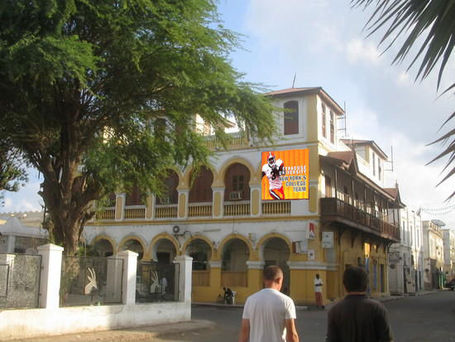 And of course, DOC, Coach Marrone and the rest of the staff are going to want to do photo ops. Let them see what they can expect and the kind of folks they'll be posing with.

Upload your photoshops in the comments below. We'll select three semifinalists and then put them to a vote. The winning image will receive an autographed copy of Orange Tip-Off (which is slightly, barely still relevant).

You've got til the end of the week. Good luck. Or as they say in South Africa, "Good luck, yoo fookin' prawn!"*

*Everything I know about South Africa I learned from District 9.