Last week, Rochester-area senior QB Ashton Broyld sounded close to a decision and his choice was going to be between Syracuse and Rutgers.

"I'm really liking Syracuse and Rutgers," Broyld said. "Wherever I go, if I feel like it's the right place, is where I'll end up."

The right place ended up being Syracuse as Broyld committed over the weekend.

"It is the perfect place for me, my family situation and the Rochester area," Broyld said Saturday night on his way back home after the visit. "This is a big step for me. I wanted to go to a place where there is a positive vibe, and there is definitely a positive vibe at Syracuse. They’ve already got it back on track there. Now, let’s keep it rolling."

A positive vibe at Syracuse? My God, things really have changed quickly...

Broyld passed for 1,961 yards, threw 24 touchdowns and only five interceptions. He also rushed for 1,540 yards and 24 TDs this year. Rush-Henrietta finished 13-0 and won the state title.

Broyld is rated as a three-star recruit by Rivals, two-star by Scout and three-star by ESPN. According them them, he's also received offers from Louisville, Eastern Michigan and Akron (OF COURSE!).

Broyld has been told he can also play linebacker, safety or even a defensive end but he really wants to try and make it as a quarterback.

Obviously the best part about Broyld is that he'll allow us to pull out a montage of Angry-Looking Broyles photos every time he does something good. 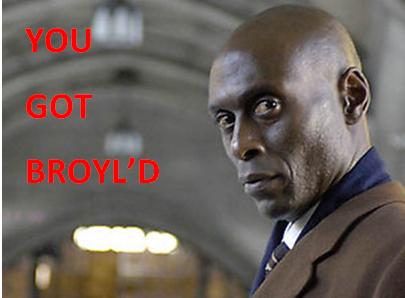 Broyld wasn't the only commit the Orange picked up over the weekend. The Nassau Community College pipeline continues to pay dividends as John Anselmo's former school now brings us LB Siriki Diabate.

Diabate, a sophomore middle linebacker at Nassau Community College on Long Island, has committed to play for Syracuse University the next two seasons. The 6-foot-0, 215-pounder was a junior college honorable mention All-America this season and was the Northeast Football Conference co-defensive player of the year.

Diabate, who was introduced to football by a friend at a Bronx park, recorded 92 tackles (72 solo), including 16 for a loss. He added two interceptions, two fumble recoveries and scored a pair of defensive touchdowns for Nassau, which went 11-0 and is ranked fourth nationally in the National Junior College Athletic Association.