Share All sharing options for: Pinstripe Bowl: Spare No Expense

The more we learn about the Pinstripe Bowl and how the Yankee organization is planning it, the more you realize that they're approaching this game the way John Hammond approached Jurassic Park. 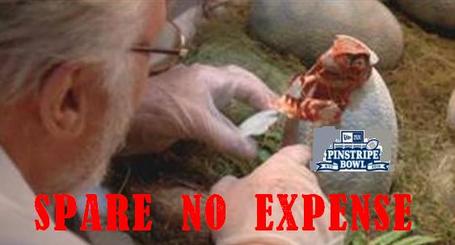 From Sunday the 26th to the time we actually get to the game on the 30th, there's barely a moment where some kind of event, press conference or sponsored opportunity isn't happening. Yankee Stadium! The teams will go to the Stock Exchange! The Empire State Building will be orange and purple! Mediocre burgers at the Hard Rock Cafe!

And this was before I even realized what the halftime festivities entailed. If you're going to the game, get ready for sing a lot of 80's music because Rock of Ages is running point. Take your college bands and shove'm cause we've got Jefferson Starship, bitch! No word on specifics but I have to imagine there will be big hair, lots of glitter and terrible clothing. And that's just in the Kansas State section (BOOM).

A halftime show like that could be a disaster if the weather doesn't hold. Considering it will be the heart of winter in New York City, that's a distinct possibility. For at least right now, however, things are looking good.

As for the game itself, Syracuse's offense has a simple goal. Make Kansas State's defense do lots of push-ups.

In case the frustrations of surrendering 2,749 rushing yards this season dissipated when Kansas State accepted an invitation to play in the Pinstripe Bowl, coach Bill Snyder is using an age-old method to keep his defense motivated in practice.

Every time a defender misses a tackle, Snyder orders the player to drop to the ground and do five push-ups.

The Wildcats are allowing 229 rushing yards per game, worst in the Big 12. Delone, Antwon...start your engines.

Kansas State is also adjusting to the fact that they're probably going to be playing in the coldest weather they've played in all year. Just like the Orange, developing young talent is also a key for the team's extra practices.