The Big East Cross Country Championships were this past Sunday in Syracuse. The Men's 8K Championships Race was the marquee race for the Orange, who wanted to defend their Big East title. Among the many racers who ran it, only the top five finishers for each team score points in the team competition. If those runners were surpassed by non-qualifiers from other schools, they would lose the chance to score those points. I think this all makes sense but just bear with me.

By the time SU's Corey Robinson crossed the finish line, he was the seventh Orange to do so. Still, that doesn't mean he had nothing to run for. So when he saw Villanova's Matthew Gibney between him and the finish line, he sprang into action with the kind of grit and determination that only comes from the Syracuse spirit: 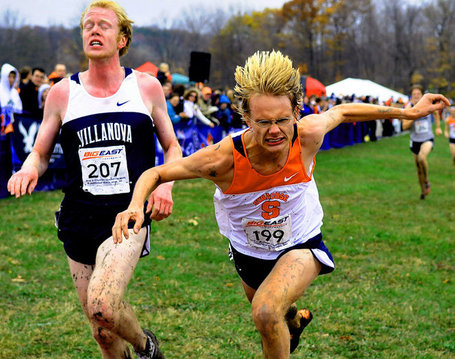 Robinson did not score any points himself by passing Gibney but he cost Villanova, Georgetown and Marquette points by passing their scoring runners late.

Here's to you, Corey Robinson. A Real Orange Hero.