Part I of the weekend review is here.

Day began with the fifth and final radio interview. A pre-taped segment with the fellas over at "Keeping The Faith" on Z89 Sports.  Had some time to kill so I headed over to my old house from senior year, 516 Euclid: 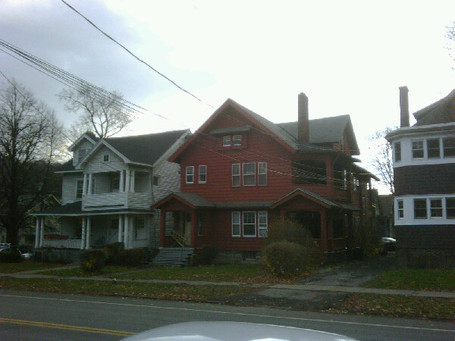 And was pleased to hear it's still being used for good.

Made my way down to the tailgate area just in time to see things getting set up. An ill-fated attempt at beer pong in windy weather gave way to just straight-forward drinking, which, accomplishes the same goal anyway. I left shortly thereafter convinced that Pinker & Co. had things under control.

Long story short, the signing was awesome. I'm humbled by the amount of people who showed up and enjoy reading the site. We signed about sixty books for folks and then signed the remaining ones as well so the SU Bookstore still has plenty of them (head on over!). My Top Five HTGAO Book Signing Moments are...

4. Hanging with Mike Borkowski, who is indeed as cool a guy as you thought he was. Glad he's got some love from folks as well, and not just for the SU art.

3. Someone asking my mom if she was my wife. Great for my mom, way too disturbing for me.

2. "You're my heroin." - The greatest and creepiest thing anyone has ever said to me.

1. Signing the belly of a pregnant Syracuse fan. Not sure if the pen ink seeped through and if so, my bad. I'll keep an eye out for the class-action lawsuit. Either way, it was the moment I was destined to have after writing a book on how to raise your child as a crazed Orange fan. And that's just good parenting...

Also a favorite thing of mine. I had the following conversation at least nineteen times on Saturday.

When it was all over, Mike and I made our way back to the tailgate parking lot, which was, um, crazed. I know we complain a lot about the tailgating scene at Syracuse but I have to tell you, I've never seen anything near the campus like this setup. I don't know if this was here when I was in school but you are seriously missing out if you don't just head in that direction before every game.

And of course, I shared a delicious Otto cookie with The Suxa himself, Glaude: 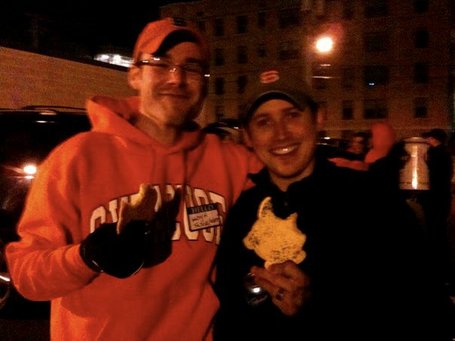 So we all head off for the Dome and make our way up to our seats in Section 314. A lot of folks seemed downright offended by my choice of seating. Call me old fashion or common but I don't mid sitting with the unwashed masses up in the 300's. That is, unless one of those unwashed folks is sitting directly behind you, screaming the same phrase OVER AND OVER AND OVER all game long. 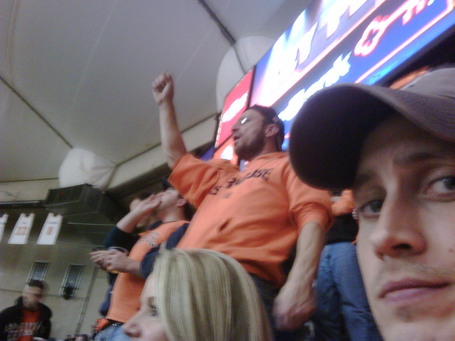 More to come on him. Let's just say I was also armed with a video camera and, like I said, he did this ALL FRIGGING GAME. If you ever have tickets in 314, you have been warned.

As for the game itself, what can I say? I tweeted during the game that I didn't understand Syracuse's game-plan and I stick to that. We've been making excuses for the offense most of the season as they've gotten by with the help of the defense. But there's only so much our defense can do. I don't know exactly what happens when the offense seems to curl up in a ball and go away, but, I just hope we sort it out enough to beat Boston College. I don't want this team to end the regular season on such a downer.

Is it Nassib? Is it the offensive line? As my cohorts said at the game, it's probably both. As much as I still think Nassib can get it together, it may just be time to start thinking about whether or not he really is The Man for the next two years. I overheard someone saying John Kinder's arm is made of Bethlehem Steel. This year ain't over but don't be too surprised to hear rumblings at the QB spot all off-season.

Back to the game, let's discuss the student section. Ah, the much-maligned student section. I was all ready to pounce of them for this one but, you know what, they actually filled that section up pretty well. At least at first.

Funnily, you could almost see the demarcation line that separated the old faithfuls from the bandwagoners. Whereas the first twenty rows were solid orange, the back of the student section was peppered with blue and other colors. You could get them to show up but you couldn't get them to dress appropriately. Baby steps, I suppose.

Of course, by the middle of the second half, that back section turned silver. As did much of the stadium. But I want to make sure the students that were there entire game, and I mean the ENTIRE GAME, get some love. Folks like blacknight76, ljmilman and pmanley who are true fans. There was a whole bunch of them going nuts all day and that's worth commending.

Everyone else sucks, though.

At halftime I had a chance to run over to where the kids from our donation efforts were sitting and snap some photos. Great to actually meet them and the people who got them there. Seemed like they were having fun...as much fun as one could have in this game. 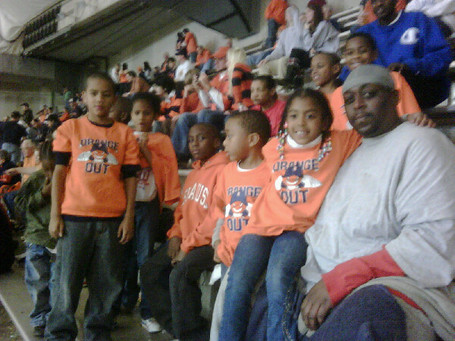 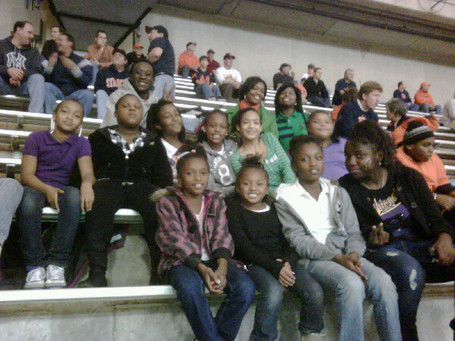 Next time, let's raise enough money to get them on the lower level. Raisin' the stakes, people!

The game wound down, everyone scuttled out. You'll be happy to know I waited until the clock hit 0:00, mostly because I knew I'd never hear the end of it if I didn't.

It was a chilly walk back to M Street. Faegans, Chucks and Lucys were way too crowded for my tastes so Glaude, myself and a few other folks decided to hit Rachel's/Regatta in the Sheraton for a nightcap or three. After that, the old man in me decided it was time to call it a night. Headed back, went to sleep and the day was done.

The next morning was my own person Amazing Race as I got to Hancock for my flight to Chicago, which was delayed for an hour and a half, and then it wasn't. We left about 40 minutes late though, which spelled trouble for my connection to Seattle. We arrived and I fast-walked it thirteen gates away to be the last guy on the Seattle flight. The bonus for my efforts...the whole row to myself. It's the little things, folks.

And then I was home. Kudos to my wife for surprising me at the airport. She's a winner.

And so, back to normal. I promise two things...

2. I will never watch Syracuse University play a football game against a team called the Huskies in person again (0-2 this year).

The game was a bummer but the weekend as a whole was everything I was hoping it would be. Thanks to everyone who came out, said hi, hung out, high-fived, shook hands, hugged, posed for photos, tweeted and commented.

Especially this guy, who spent the entire game checking my Twitterfeed after each play. You sir, are what everyone else should aspire to be.