Share All sharing options for: The Homecoming: Part I - The Arrival, Media Blitz & Faegans VIP Room

The trip began Thursday with a bit of a snafu. While going through security at SeaTac, my Trader Joe's shaving cream was confiscated. My goal of being clean-shaven and presentable for the signing had already been ruined. (No, I couldn't go down to CVS and buy more, it's the principle, dammit).

The good news, I still had my most important item packed and ready: 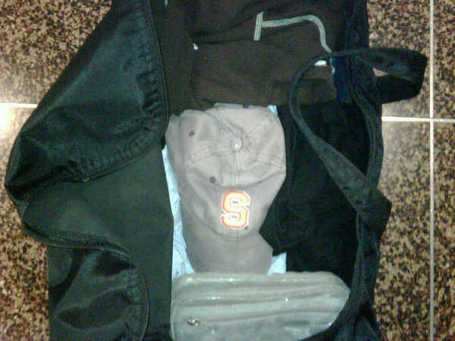 A three-hour layover in Chicago provided a special bonus. I walked over to the O'Hare Hilton and met up with a good friend of mine from freshman year at Cuse that I hadn't seen in, I don't know, seven-eight years. So yes, I had an intimate rendezvous with a gentleman at the O'Hare Hilton is between flights. Do not judge.

Finally made it into Syracuse at midnight and made the fatal mistake of taunting the Weather Gods, thinking it wasn't THAT cold in town. My former SU roommate Tom picked me up in what would be the first of many chauffeur moments for him all weekend. He was truly the Kato to my Green Hornet, getting me everywhere I needed to be and karate chopping more than a few overzealous readers along the way.

Woke up Friday to the news that former Orange Mike Williams had been arrested for a DUI that wasn't really a DUI but he still probably should have been arrested because driving erratically. It was all a big MISUNDERSTANDING. The first time that's ever happened to Mike. Ever.

Great East Coast/West Coast moment to start the day. Tom was heading over to Dunkin Donuts and asked me if I wanted anything. Sure, just grab me a Caffe Mocha, cause, you know, that's what West Coast folks like me drink. Tom returned to tell me that my request nearly shut down operations at the establishment as they sat there and tried to figure out how coffee and mocha could be combined. Lesson learned...back to basics while I'm out here.

Headed off to campus to find that, aside from a few aesthetic changes, it was EXACTLY the same. I mean, I would walk down corridors and walkways and it was as if I never left.  Of course, no one told me the School of Management was a whole new thing. And no one seemed to know exactly what happens in the old SOM, so we'll assume it some kind of Guantanamo Bay holding center.

Started tweeting when I got on campus and the power of social media took over.  Kim Brown over at SU Career Services tracked me down and somehow I ended up shooting the first-ever SU alumni video profile for the site.

Stopped by the Ernie Davis statue to pay my respects and also triple-check that all the Nike swooshes were gone: 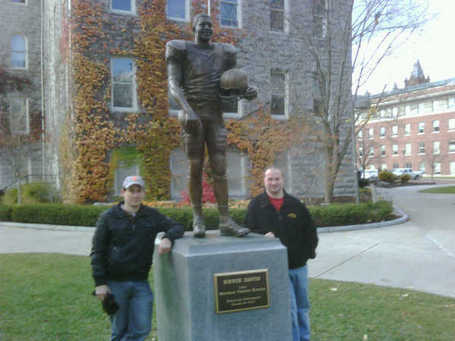 Finally time to swing by the bookstore and get the lowdown on tomorrow's signing. Met with some very cool, very excited folks in there who showed me the whole set-up, asked me what kind of foods and beverages I wanted at the signing (ONLY green M&Ms, obviously) and all that good stuff. Got a sneak peak at the SU Holiday catalog that HTGAO is a part of and should have already arrived in your inbox.

Also, met with the head of t-shirt merchandising and licensing over there and came with a very exciting development. It's possible, not 100% yet, but possible that the SU Bookstore could work with TNIAAM on some exclusive, fully-licensed t-shirts. I threw out the idea of doing an official Viva La Revolucion t-shirt and they said, as long as Marrone signed off, we could do it. So...stay tuned on that awesome news.

From there it was time for the media tour to begin. Three hours, four radio interviews, two in-studio appearances and a whole lot of talking about the same thing.

It started with a call-in to Matt Mc's Sports Fix, the audio can be found by clicking the 11-19 podcast tab. While I was on the phone with Matt, we headed over to the home of Brent Axe and Danny Parkins, The Score 1260. Finally got the chance to meet Brent, whom I've known online for years now. Great to see where the magic happens and spend some time chatting face to face. 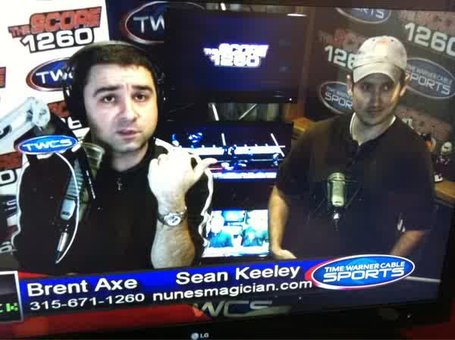 From there it was time for a quick call-in to Z89 and then it was off to ESPN CNY in Armory Square. Great to meet Lauren and all the guys and had a great time hanging out with them as well.

The media tour was done and it was time to get ready for the Faegans' evening o'fun. I had fallen short in the Pat Manley Challenge (44 short of the 600 goal) so I was back to buying my own hooch. Showed up and glad to see the place looked exactly the same, expect for the fact that everyone in there was twelve years old. Even the Cherry Wheat tap was still there, which reminded me that I haven't drank Cherry Wheat since 2000 and didn't even know it still existed.

Immediately ran into a bunch of friends from the site and from my time at Cuse so we decided to take over the VIP room in the back.  Hey, that's Brian Harrison! Hey, that's Danny Parkins! It was a veritable who's who of important-ish people.

Then things got weird. 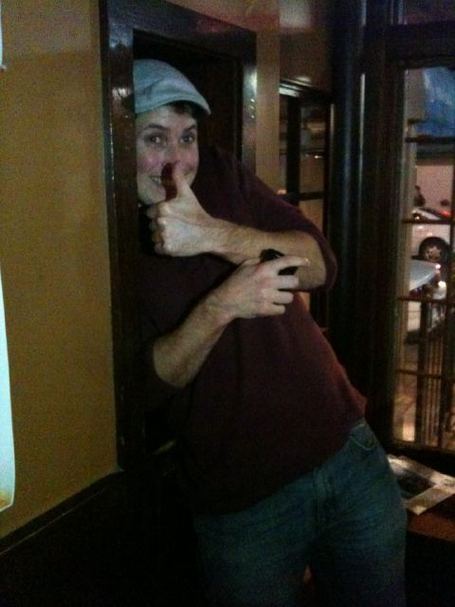 The evening winded down. Sooner for me than others, apparently. Went back to Tom's, chowed down on pretzels for a half-hour, called it a night and prepared for the big day. Who knew it would end with so many books, so many photos and so many awkward moments after Syracuse snapped the ball...