Real Talk, Yo: BASKETBALL IS ON FIRE!

Share All sharing options for: Real Talk, Yo: BASKETBALL IS ON FIRE!

Depending on who you are, that headline may or may not be a lie.  If you're like me (handsome and the proprietor of a website for really smart people), the Syracuse basketball team isn't really on fire in either the figurative or literal sense. In fact, if the hoops team was literally on fire, this would be a national travesty requiring appropriate in memoriams and flags at half-staff and candle light vigils where we hold each other and say things like, "Everything is going to be all right."

If you're a Hall of Fame head coach with, like, billions of basketball victories, Orange hoops is a five-alarm job; there are fire engines from six towns surrounding the Carrier Dome and we should all pray for minimal loss of life.  I'm not even making this up. Look at Boeheim's quote from Mike Waters' piece today in The Post-Standard:

So, we're at a realism impasse: Boeheim's position of, "Heads are going to roll and my machete is itching for blood" and my position of, "Woah, woah, woah.  Hold on a second there, Genghis."  The question is, therefore, "Who is right?"

The probably correct answer: Boeheim, because he is my basketball messiah and I shall read his testament and accept his teachings in my heart.

Let's look at a fancy aggregation of information and totally extrapolate things like professional extrapolators: 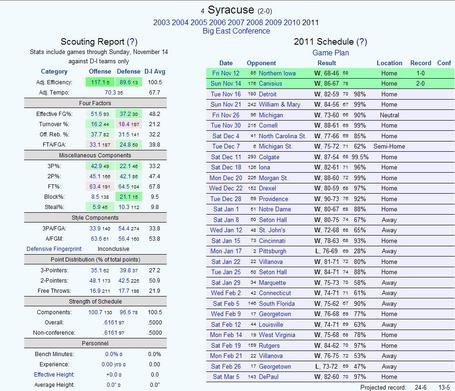 via hoyasuxa.files.wordpress.com (Click the image so that, you know, you can see the damn thing.)

There's lots of work to be done, but it may be a little early for Boeheim to read the Orange Empire the full riot act. The foundation is sound but some renovations are in order.