Share All sharing options for: Syracuse Is Basically Daring You Not To Attend The SU-Pitt Game

I've always wondered why, given the state of attendance, Syracuse doesn't just pick one game a year and say "F**k it, we're selling this game out if we have to sell tickets for a dollar." Why not? You pack the Dome, which excites the fanbase, and gets a lot of expendable income inside the building where the beer and Dome Dogs are.

Well, consider this deal that just arrived in many of your email inboxes... 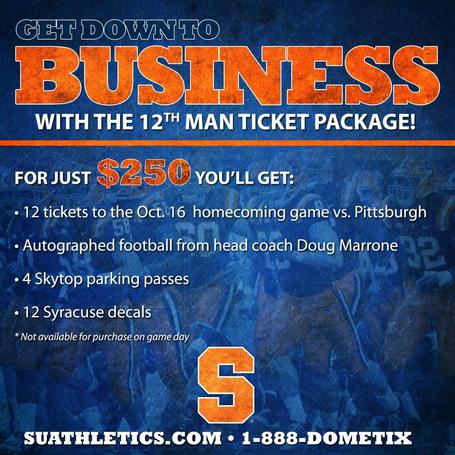 Setting aside the decals and the football for a moment, the meat of the deal is the 12 tickets and the parking passes for $250. Even if you eliminate the parking passes, that's still 12 tickets at $21 a pop. And you're guaranteed to be next to eleven die-hard Cuse fans. And chances are one of them will get drunk before you and put everyone's food on their credit card. And you're not above taking advantage of that.

Gotta say...sounds pretty legit. Well played SU Athletics, well played. If you're a fan who's been waiting for the right time to attend a game, I can't think of a better deal that's gonna come along.  Not only is it a cheap ticket, but its against a quality opponent. AND YOU GET A DECAL!

It does feel like, as a program, we're on the precipice of something on and off the field. I think SU Athletics senses that too. Another win or two and all of a sudden that Dome's going to get a lot fuller a lot more often. Something like this is the perfect kickstart to help it along.

You can make your order via SU Athletics here.