Syracuse vs. South Florida: Return Of The Standpoint

Share All sharing options for: Syracuse vs. South Florida: Return Of The Standpoint

I feel pretty good about where we are from a secondary standpoint.

This group of defensive linemen really step it up from a standpoint of athleticism and I give them a lot of credit.

There is a lot of stress on these kids from an academic standpoint and their families and communities.

All the players that we’ve had from the state of Florida have been very successful both on the field and in the classroom here at Syracuse and that has helped us that a lot of those people have gone back to their communities and done well for themselves, which helps us from a recruiting standpoint.

There are a couple ways to look at it. I look at it from a standpoint of its all how you handle the week. If you handle it from the standpoint we have where we’ve had players with nicks and bumps and have gotten them healthy, that has helped us where normally you can’t do that during a week.

What else do I know about Doug Marrone. He refers to the Giants as the "New York Football Giants." He is a delight.

Could SU Athletics use a worse headline than "Smith To Miss Remainder Of 2010 Season" when letting us know freshman RB Jerome Smith is out with an injury? Cause all due respect to Jerome, but he's not the first Smith I think of when I see that.  You're going to give us a heart attack, folks.

Finally, this is the photo of Skip Holtz that USF is using to promote him and the program, presented without comment. 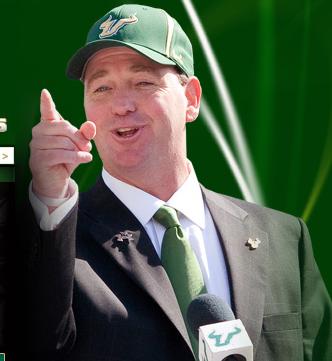