Syracuse 31 - Cincinnati 7: All Your Homecomings Are Belong To Us

Share All sharing options for: Syracuse 31 - Cincinnati 7: All Your Homecomings Are Belong To Us

6-6 was the go-to prediction for any Syracuse fan before the season that wanted to be optimistic with a dash of realism. I should know, it was mine.

We knew three wins would be in the bag (Akron, Maine, Colgate). We thought between Washington and BC, we could split those game. And in the Big East, we figured we could take Louisville and maybe steal one from Rutgers, UConn or USF. 6-6 wouldn't get us a bowl game, but it would get us respect and good vibes heading into next year.

Depending on your definition of "being back," you'll have to go back farther and farther to find a correlating Syracuse team. I think we can all agree we're not at that 50's one just yet. And the Washington and Pitt losses can confirm we're not at the 80's one either. Maybe we're not quite at the late 90' one as well, but hey, just like them we're officially competing for the Big East title late in the season.

Think about that. On Monday it will be November and Syracuse football is still relevant. Maybe that's not "being back" to you, but I'll take that in a heartbeat.

Still plenty to do. Stranger things have happened than a team starting 6-2 and then losing out. I just don't see that happening, not with what we've seen out of this team (and the team we're playing). The next win is about meeting our stated objective (winning record, bowl bid). After that, we'll see. The Big East is an insane asylum right now. Nothing makes sense. So there's no reason to think we can't keep going. 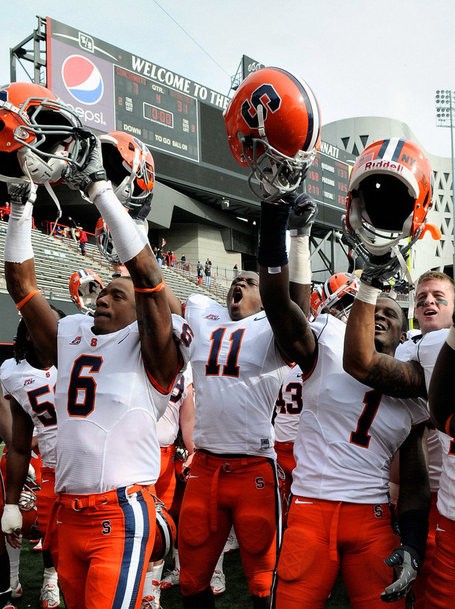