SU Basketball Brings Hope To Kids, Gives Bernie Fine Something To Do

Share All sharing options for: SU Basketball Brings Hope To Kids, Gives Bernie Fine Something To Do

The SU Men's basketball team was at Drumlin's Country club supporting the Boys and Girls Club of Syracuse and the Hoops For Hope event. One intrepid Cuse fans, Josh, brought his copy of Orange Tip-Off with him and ended walking away with the most valuable version of the magazine out there: 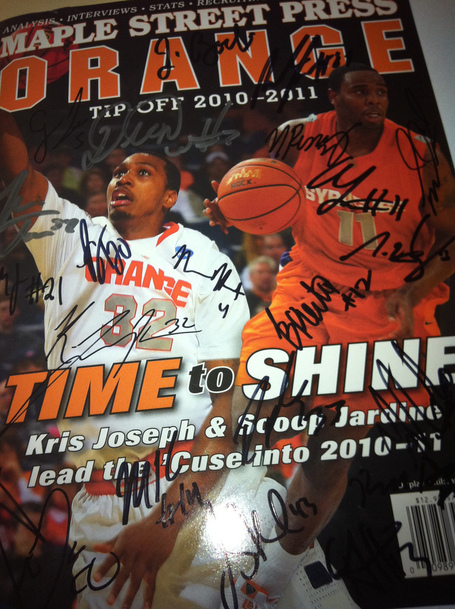 Does that mean Mookie read the article about himself? Uh-oh...

Here's some video from the evening's festivities. My two favorite moments?

1. "I'm joined right now by SU Hoops coach Bernie Fine. I thought we were gonna have Scoop Jardine but, uh, Scoop's running a little late." That's the story of Bernie's life, isn't it?

2. Scoop turns this into a Saturday Night Live sketch as he struggles to put on his mic for ten seconds.