I know this isn't the best week to draw comparisons between your football team and Nazi Germany, but I truly feel like we need to recognize a certain Kraut in orange.

Ross Krautman kicked four field goals on Saturday to help the Orange beat West Virginia. The distances (19, 22, 28, 33) don't sound like too much, but when you throw in the fact that a) he's a freshman, b) he's kicking on the road in a hostile environment and c) all of those kicks were on an angle, if not at a hash-mark, then you realize The Kraut deserves a tip of the cap. He got one from the Big East, which named him to the Honorable Mention list this past weekend.

Not bad for the guy who supplanted mega-fan-favorite Ryan Lichtenstein(!). Once we realized Ryan Lichtenstein's sore leg was going to remain sore for the next three seasons, Ross' margin for error was practically nil in the eyes of Orange fans. So far, he's 10-11 on field goals and 19-20 on extra points. His 49 total points are good for a fifth-place tie in the Big East. Good work, Kraut.

No discussion of Syracuse kicking can be complete without mentioning Rob Long. Long's so good we've become bored of his greatness. "Oh, he booted it sixty yards and pinned the other team inside their 10? Yawn, wake me up when Law & Order: Los Angeles is on. I find it comforting and reassuring, like an old pair of furry slippers."

Long had six punts against West Virginia, good for a total of 310 yards. Two of the kicks were downed inside the 20 and a huge part of how SU kept the Mountaineers off the scoreboard in the second half.

His career total is now 10,186 punting yards, good for second place on SU's all-time punting yards list. He only trails Brendan Carney now (11,534).  With 1,619 punting yards on the season so far, Long needs 1,307 to take over the top spot. It's a lot to ask in five games, and SU fans would certainly rather than he didn't break it, instead using those drives to score lots and lots of touchdowns. Either way, it's quite the accomplishment.

Here's looking at you, Rob, who is also looking directly at us (via Syracuse.com): 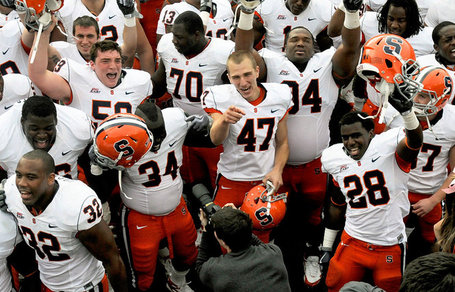