Share All sharing options for: Syracuse Football & The Quest For Beef - Week 8 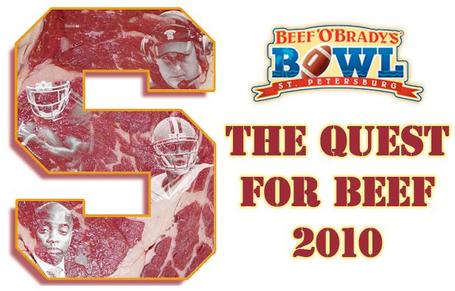 "Our life is a long and arduous quest after truth and the soul requires inward restfulness to attain its full height." - Mahatma Gandhi

Good point, Mahatma. n layman's terms, if you want the Beef, you have to search inward to find it. We now look inward into the Big East Standings: 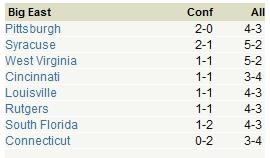 Syracuse shoots all the way back up to No. 2 with a bullet. Hi, UConn!

Most Likely To Beat: UConn/Boston College - Louisville can't be considered a pushover anymore after their schmissing of UConn. Now, it's the Huskies that seem the most vulnerable in the conference. BC has the worst record of any team left on the schedule.

Most Likely To Lose To: Cincinnati - The Bearcats are coming off a crazy loss to USF but offensively they've got enough weapons to drop 30+ points on us. Considering our offense hasn't scored out of the teens in the last three games, that's a problem.

Current Beef Bowl Opponent Projection (CUSA #5): SMU (4-4). The Mustangs were sitting pretty in CUSA until back-to-back losses to Navy and Houston knocked them down. Critical games against Tulane and UTEP are on tap.

Gordon Ramsey's Feelings On Syracuse's Chances For Beef: Congrat-u-f**king-lations on winning. Who'd you beat? A bunch of f**king tosspots from West Virginia? COME ON...you've got to do better. PLAY LIKE YOU'VE GOT SOME F**KING STONES!