Speaking Of An Orange-Out, How Orange Will Syracuse's Uniform Be?

Share All sharing options for: Speaking Of An Orange-Out, How Orange Will Syracuse's Uniform Be?

There is no report of an orange jersey on Saturday against Pitt.

No one has even so much as mentioned it is a possibility.

But still...you gotta wonder, with all the effort SU is putting into making the Pitt game HUGE for Syracuse fans...will we see an orange jersey on the field Saturday?

There's a lot of things converging this weekend that make it the perfect opportunity to break out the mythical orange jersey. It's Homecoming, or whatever silly name SU is giving it. SU is obviously trying to sell out the Dome for the game. You've got the Orange-Out happening. Throw in the fact that Syracuse is 4-1, in first place in the Big East and is officially back in the right direction. The fanbase is jacked. Alumni are thrilled. Boosters must be threw the roof and Club 44 is gonna be rockin'. This weekend is the perfect one to throw a little something extra into the mix.

So let's assume it was happening. That the orange jerseys were making their return. What should we expect? And more important, what should we want?

First off, we don't want this. That much is clear.

It's amazing what a little white can do. Take something very similar to that all-orange abomination we tried a few years ago and throw in some white piping and stripes and all of a sudden you've got something pretty presentable, as noted by CuseOrange's winning alternate jersey design from the Create Your Own SU Uniform contest. 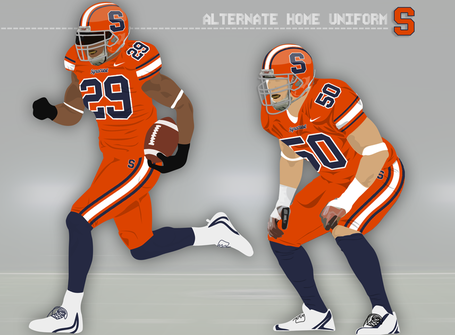 Of course, I've also seen some folks who think the orange jersey would go much better with white pants. We've been wearing orange ones so that's the most likely scenario, but just in case, let's see what it might looks like. Of course, there's some differences with NOLACuse's design and the current SU version, but you get the idea: 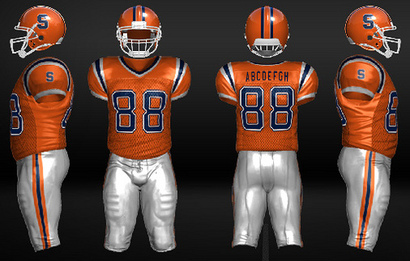 As stated earlier, there's no official reason to think the orange jerseys are coming out this weekend. But then again...if they were gonna come out at all, this would be the time.