My high school got lacrosse when I was a junior. We didn't even have actual lacrosse jerseys, we used football jerseys instead. The guys who were also football players had their names on the back of their jerseys since they owned them while the rest of us just used ones without. We looked weird, for sure, when we lined up against teams with legit lax unis, but it was part of our charm. We were horrible that first year, as to be expected, but everyone remembered us as that lacrosse team wearing football jerseys.

My point is, as strange as we might have looked, that was NOTHING compared to the awesome outfits the Syracuse Alumni were wearing in their game against the current SU team this weekend. 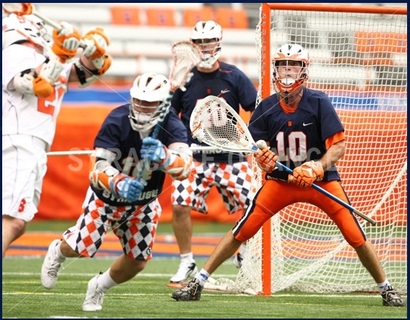 I imagine that on their sideline, the water cooler was full of lime rickey. And yes, that is Matt Palumb wearing SU football pants in goal. Like he used to.

The current SU team won the actual game, 14-12. The alums jumped out to an early 4-1 lead but that quickly gave way. Still, it took two late Jeremy Thompson goals for the newbies to outlast their forefathers.

Nims then scored on an assist from Leveille 57 seconds into the fourth quarter to tie the score at 11-11. Leveille gave the Alumni the lead when he scored off a feed from Chris Daniello with 11:09 remaining. That was the Alumni’s last tally as the Orange recorded the final three goals in the game to post the victory. Redshirt sophomore Ryan Barber tied the score with his only goal of the game on an assist from Jake Bratek at the 6:53 mark, and Thompson’s first goal of the game with 4:07 remaining gave Syracuse the lead for good. Thompson clinched the victory with his second unassisted goal with 2:28 on the clock for the 14-12 final.

The teams decided to play an extra fifteen minute quarter, which the current team won 3-0 as well.

You can see a full gallery of photos from the game here.

Inside Lacrosse has a full rundown of the game, recap and player interviews. SU goalie John Galloway talked about the freshman and who he expects to see step up this season:

"I think a lot of guys have stepped up. It's tough with 20 guys to get a lot of reps, but I think (Derek) Maltz is doing phenomenal on attack. I think Billy Ward is going to be great asset for us, even this year. A couple of D guys, Matt Harris, Pete Macartney, they're all playing well. Hakeem Lecky. They're so many of them. The face-off guys are doing great, with Daddio and Buhr. ... With 20 guys, some of them are going to step up, and we're excited to see who it's going to be."