Share All sharing options for: The Growing An Orange Contest - Final Entries

Alright, that's it for the Growing An Orange contest. Last night was the deadline to enter and bunch of you just made it. (Of course, no one is going to stop you if you still want to submit any GAO photos for posterity and to prove yourself a competent parent).

And now on to today's entries... 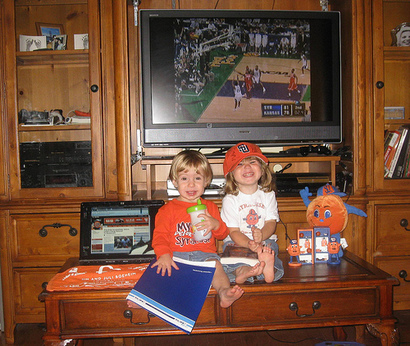 Three points for the plush Otto next to them.

For the little Otto's, the tickets and the orange bad, we'll go with five points.

I see How To Grow An Orange, that's ten points.

And I see TNIAAM, fifteen points.

Not only is SU on the TV but its the 2003 National Title game. I grant ten points.

The blue folder holds PaulieDars' job offer letter from a company in Syracuse, which means he is moving the family into the vicinity of SU. That's a special bonus of good parenting for twenty points. 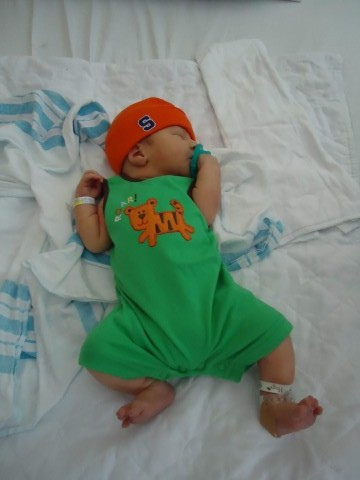 One point for the SU skully.

Bonus ten points for the fact that he's wearing it in less than 24 hours since being born. That's fantastic assimilation time.

He was born at Crouse Hospital, literally right around the corner from campus. Again, great foresight by the parent. Bonus five points. We might be looking at a Syracuse Mega-Fan in the making. 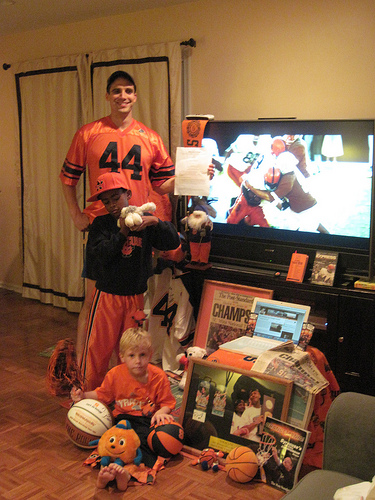 We'll go with Davis for the hat, shirt and pants for three points.

We have a "syracuse bear, su pin, orange pack calendar, SU pick of Melo after title, 3 tickets to Colgate game that the boys attended, pom-pom, Syracuse Santa, and yes a SU snuggie used as a table cloth" - ten points.

There are two other folks present in Cuse gear, two points.

Plenty of Otto here, three points for that.

Nice shot of The Express on the TV, that's good for five points. Bonus point for also getting the DVD box in there.

Davis is choking a little husky, which sounds like UConn desecration to me, seven points.

That page in FFC's hand is the first page to HTGAO in PDF form. Good enough for ten points.

TNIAAM is on the computer screen, fifteen points.

Super Bonus points for naming your child Davis for exactly the reason you think. Thirty points.

Bonus five points for living in Princeton, where my mom lives. Just because.