The Beggin' Strips Have Spoken

Share All sharing options for: The Beggin' Strips Have Spoken

Really, when trying to prognosticate whether or not Syracuse will go to the Final Four this season, sending a dog to sniff out bacon-flavored treats is no less an exact science than anything Joe Lunardi does.

Syracuse is going to the Final Four.  So says Jack, the one-year-old dachshund of NBC3's Niko Tamurian.  Jack was presented with four delicious options.  He could have chosen "out in the 2nd round," Sweet Sixteen, Final Four and National Championship.  There was no doubt in Jack's mind as soon as he sprung forth.  It was the meaty, full-bodied flavor of the Final Four all the way. 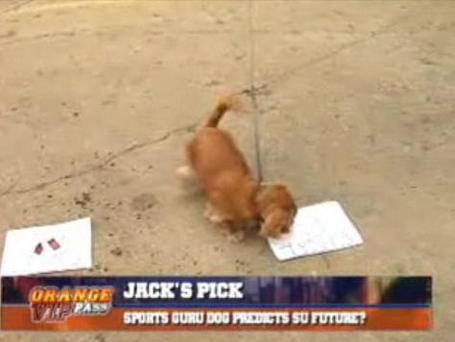 A bit of an upset considering the Sweet Sixteen note was weighted with two Beggin' Strips. Clearly, this was pre-ordained.  Unfortunately that means the Orange won't be winning the National Title.  But hey, another Final Four in the collection won't hurt.

Watch the thrilling video here and then go grill up some bacon.  Cause you're gonna get hungry.  Which is weird, cause it's a dog treat.