Share All sharing options for: Penn State Might Win The Game But Syracuse Fans Have Already Won The War

As you can imagine, Penn State has done it's fair share of White-outs in it's day.  It's a little stale at this point.  And let's be honest, I'm not entirely sure we're worth the trouble.

That said, a modicum of good taste and/or  is always appropriate when planning an organized -out with your fans in the stands.  Take Boise for instance, who tried to color-code each section of the stadium.  It's different but at least it keeps things orderly and making sense.

Not so much for Penn State fans this weekend.  It's Classic Day in Beaver Stadium and as such, Penn State fans are being asked to wear tye-dye Penn State shirts to the game.  Why, you ask?  Because Syracuse and Penn State played each other in the 60's.  Or something.

The Penn State - Syracuse football rivalry goes way back so Classic Day is going old school! Sixties music and looks will be everywhere, so get ready for peace signs and tie dyed shirts.

Come decked out in your best 1960's (think hippie!) outfit and keep an eye out to spot the 1960's theme throughout Beaver Stadium!

It makes sense, I suppose.  I mean, I'm sure if you went searching for "Penn State football" and "1960's," it would surely spring forth with a very definition and visual metaphor for free love: 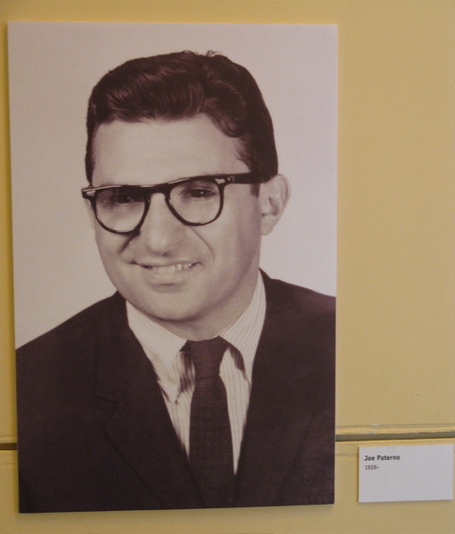 Let's just hope JoePa doesn't look up at all the tye-dye shirts in the crowd, get hippie-bashing flashbacks and spring into the crowd with a crowbar to crack skulls.  Then again...