Kneel Before The Power Of The Syracuse Twitterati

Share All sharing options for: Kneel Before The Power Of The Syracuse Twitterati

ON Saturday, Yahoo! columnist Dan Wetzel said (via Twitter) that...

Twitter is the death of the live blog, a blow in general to blogs. Old media striking back at new media by using newer media

About the same time he wrote that, "Syracuse" and "Greg Paulus" were reaching unthinkable heights in this new media world.  They had become Twitter Trending Topics: 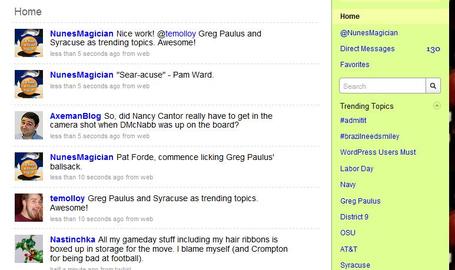 As far as I can tell, those terms didn't become trending topics because of mainstream media journalists.  I mean, we know Donnie Webb was tweeting from the game as were some other journos.  But it takes a lot of people tweeting about a certain subject to become a trending topic.  That means it all comes down to the fans.

To Dan's point, I did host a liveblog on the site this week.  I will continue to do so.  But I know what he's getting it.  There was more immediacy with Twitter.  There was something to the Twitter community and the way we all reacted in unison to each play.  They way we all played off each other with each joke and comment.  It's...better.

I see the theory behind Dan's comment but I'd like to revise it make it work better.

Oh, uh, disregard that comment about Pat Forde and Greg Paulus' genitals.  It got a little heated...