It Goes THE DOCTOR, Then Jim Boeheim, Then Everyone Else

Share All sharing options for: It Goes THE DOCTOR, Then Jim Boeheim, Then Everyone Else

Love the SUAthletics.com story about The Melo Center ribbon-cutting ceremony yesterday.  First off, OBVIOUSLY you-know-who is in the photo: 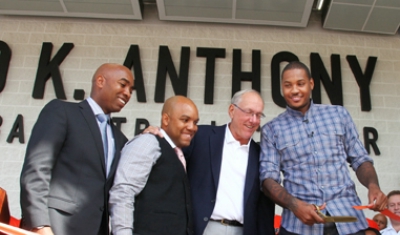 Thankfully, the press-release gets off to straight-forward start.  Then around paragraph three, the Syracuse heriarchy of importance was officially established:

In addition to Anthony, Dr. Daryl Gross, director of athletics, and coaches Jim Boeheim and Quentin Hillsman participated in the program. Representatives of both the men’s and women’s basketball teams attended as well.

Obviously, no one really cares if Gerry McNamara was there (he was) or if John Wallace was there (he was) or if the current members of the basketball team were there (they were).  We're not even sure care about this Boeheim fellow, whatever he coaches.  Nope, the first thought on everyone's mind absolutely has to be, "Hurry up and tell me if DOC Gross was there! That's what's important!"

Team officials will be relocating to the office suites next week and the official grand opening will be held on October 3rd.  We also learned some very nice green facts about the building of the Melo Center, including: