Share All sharing options for: As Usual, Julie Boeheim Saves The Day

The Melo Center, which officially opened today during a ribbon-cutting ceremony, might have never been if not for one very special, very foxy person.  Who else?  Julie Boeheim.

During the short time period Anthony brought up the fact that the idea of the Melo Center was proposed to him by someone after he let it be known that he wanted to give back to the university. During the presser Anthony didn’t elaborate on who that person was, but a little later at the ribbon cutting ceremony outside of the center, Syracuse head coach Jim Boeheim provided that answer for us:

"My wife was the one responsible for asking him (to be the namesake of the Melo Center)," Boeheim said. "And the next day it was done."

Impromptu cow-miking and now impromptu million-dollar donation-baiting.  Is there anything she can't do?

A veritable who's-who of Syracuse basketball royalty were on hand for the opening.  Jim Boeheim, Quentin Hillsman and Carmelo were there, obviously.  Also on hand were SU legends John Wallace and Gerry McNamara.  One can assume The Wallace Center, a prestigious men's and women's basketball bathroom facility and The McNamara Center, a state-of-the-art parking lot, will surely break ground soon.

Oh, DOCTOR Gross was there too.  But you already knew that.

My favorite part of the story so far has to be this photo from the event. 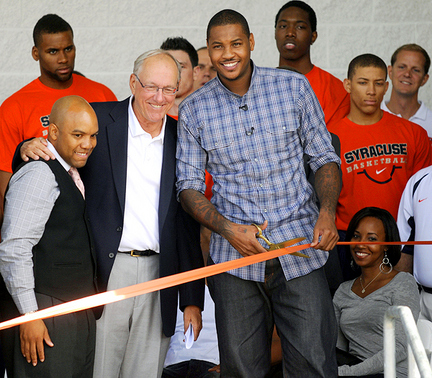