Share All sharing options for: 2009 Syracuse Football: The Predictions

The boys over at the P-S have made their beds and now they will have to lie in them. But before they do, they'd like to share them with you.

Their predictions, not their beds.

Donnie is the pessimist of the group, going 3-9. He sees wins for the Orange against Maine and Akron and only one Big East win (L'ville) ahead. He does have Syracuse down as losing by one point to Northwestern, West Virginia Pittsburgh, Louisville and Rutgers, which would make for one helluva painful and emotionally-jarring season. Easy there, sadomasochist.

Next up is Rahme who is slightly more positive, giving the Orange a 4-8 finish. He too pegs the Orange for wins against Minny, Maine and Akron. He adds in a surprise win over Rutgers despite having us to lose to Louisville. Guess if we're not going to be great, destroying Rutgers' hopes would be a nice consolation prize.

And that brings us to Bud Poliquin. Mr. Glass-Is-Half-Full himself. Bud felt so strongly about his picks he wrote a whole piece on them and the logic behind them. Bud supposes you can choose to be a pessimist. If that's your thing...

You can choose to see the hole and not the doughnut, the thorns and not the rose, the fat and not the steak. You can place the bar so low that a hippo could hurdle it. You can determine that the glass is not only half empty, but cracked and leaking cranberry juice all over the lace tablecloth.

STOP DRINKING ALL THE CRANBERRY JUICE, YOU GUYS! Save some for later.

But that's not for Bud. No sir, Poliquin moves to the beat of his own drum. And he'll back that up with any reference your Dad can think of...

Me? I'm choosing to be like the 80-year-old newlywed who buys a house near the grammar school. I'm hearing Bluto giving that pep talk in the frat house. I'm thinking the '69 Mets, Buster Douglas and Chaminade.

Is it wrong that when I think of an 80-year-old newlywed who buys a house near the grammar school, I think of this guy: 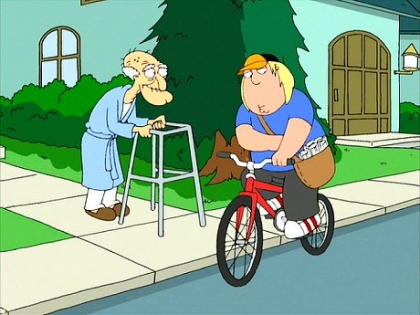 Regardless and nonetheless, Bud is an optimist. And as an optimist, Bud is foreseeing a 6-6 season for the Syracuse Orange. That's good enough for the team to finally complete The Quest For Toronto, so I guess I shouldn't complain.

Bud has the requisite wins over Minny, Maine and Akron. Then he gets a little optimistic-y and predicts a win over USF, Louisville and UConn. Is it weird that Poliquin's the only one who thinks we can beat Louisville?

Alright now it's my turn. I've gone back and forth a couple times this off-season. I started the year talking about how this team had a shot to go 6-6 this season. Gun to my head...I can't commit to that just yet. But I am willing to say that this team will not be as bad as you might think, simply because neither was last year's team.

SU 28, Minnesota 24: Egged on by the best Dome crowd in years, the Orange hang tough with the more-polished Gophers for three quarters and then break through late for the shocker. (1-0)

Northwestern 27, SU 13: The Orange give the Wildcats more trouble than last year but NW is a solid team and they pull away late.

SU 31, Maine 14: The Orange jump out to an early lead. They're unable to stomp on the neck, a trait they have yet to learn, so it's not entirely out of the question until the middle of the 4th quarter.

South Florida 30, SU 20: The Orange keep is competitive but the talent on the other side of the field is ultimately too much to overcome. Matt Grothe still looks like a Cabbage Patch Kid.

SU 24, West Virginia 17: Call it a shocker if you like. The Orange had the Mountaineers in a beatable position last year with Jarrett Brown at the helm. This year they get WVU at home and Doug Marrone doesn't coach them out of a win, unlike someone...

SU 20, Akron 14: Not as pretty as we'd like it to be but the Orange at least avenge last year's debacle.

Cincinnati 30, SU 24: The Orange get caught napping against the Bearcats swarming offense. They're able to put up points on the D, just not enough.

Pittsburgh 35, SU 20: Pittsburgh puts this one away early, though the Orange keep things slightly interesting.

SU 27, Louisville 24: A well-played game by both teams, the Orange just have Louisville's number. Victor Anderson aside, there's no reason to think SU can't do it for the third year in a row.

Rutgers 23, SU 14: I'd love to say we've got this one in the bag but Rutgers really, really doesn't like us. And they're still a little more talented than us, so...

Connecticut 20, SU 18: One of those games that the Orange SHOULD win but I UConn has that weird pact-with-the-devil thing going on where they win games they're not supposed to. In a way, this could be good long-term. The rivalry will be that much stronger and we'll want to beat them that much more next year when we're better.