Sweet mother, Post-Standard.  What have you done???

The 2009 Syracuse Orange Football Preview is up and it's a doozy.  First and foremost though, we need to take a look at this: 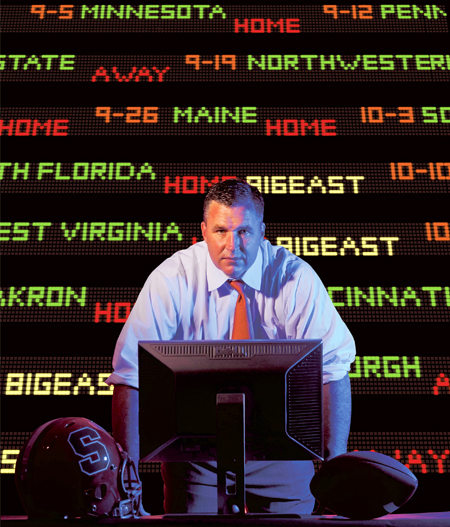 Photo illustration by Frank Ordonez and Tom Schmitt / The Post-Standard

Sweaty Doug Marrone! Rolled-up sleeves! Stocks! Technology! It's not the Daily News SU Football Inferno, but it's a very close second.  If there were flames arbitrarily shooting out towards Doug, it would have been the winner for sure.

Greg Paulus has been, rather unwisely, mentioning that he has yet to take a really good lick in practice.  He can be sure that the time will come this Saturday.  And even Doug Marrone knows that we really won't know what Greg and this team are made of until that happens.

"It's easy to play this game in shorts and T-shirts when you know you're not going to get hit," he said. "It's a very difficult game when the guy in front of you knocks you down or hits you hard or knocks the wind out of you. It's how you respond to it."

Translation of the latter reference: option. Marrone is apparently unafraid about hinting at a mode of football transportation that had become a four-letter word for many in these parts during the Pasqualoni era. He is also unapologetic about using another word favored by Pasqualoni to describe his offensive philosophy -- multiple.

"An attacking defense doesn't mean you're blitzing seven guys on every down. It means that up front you're going after them, you're trying to create a new line of scrimmage. When they want to run a zone play we want that ball to bounce sideways, make the ball go east and west.

The big key for the Orange at this point...staying healthy.  Depth is an issue in some areas and in fact there is none in some of them.  Don't tell that to Doug Marrone though, dude's got rose-tinted glasses on in that department.

"I don't think we're going to be the type of team this year that has a lot of depth," Marrone said, displaying a knack for understatement. "We have to find some versatility from our players and make sure we stay healthy."

It does me no good to break down Syracuse.com's breakdowns.  So why don't you head over and check out the fine work of Donnie, Dave and even Bud (though we'll get to him in a minute...)  And if you're not excited by the time you're done reading...you are Orange Pride-less.  Yeah, I said it.