Share All sharing options for: Syracuse To Play Bizarro Northwestern This Weekend

Contrary to popular thought, Syracuse will not be playing Northwestern on Saturday.  At least, not as once assumed.  It seems now that a rift has opened between our world and the Bizarro World and the Orange will be facing off against Bizarro Northwestern instead.  I mean, how else do you explain...this? 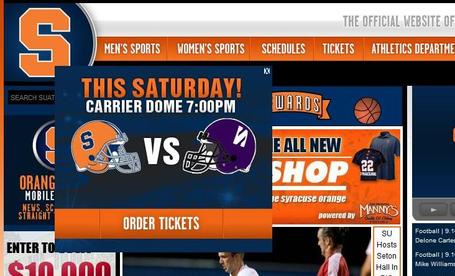 The Northwestern logo in question is clearly inverted, indicating that a portal that opened up between Earth and the Bizarro world of Htrae.

"Us do opposite of all Earthly things! Us hate beauty! Us love ugliness! Us would prefer to play in International Bowl, which is a great honor, while playing for the National Championship means you are good. And by good, I mean not good!  Us very confusing!"

When told that his players were tremendous, Coach Patfitz took great offense, as in his world to be called tremendous is a great insult.  The situation was rectified when the "accuser" told Patfitz that the Bizarro Wildcats were indeed a horrible team.

Doug Marrone has instructed his players to immediately flip everything they have been practicing.  Greg Paulus will now line up at weakside linebacker and Arthur Jones is taking snaps at quarterback. Marrone says it's all part of the plan.

They'll be expecting us to do the opposite of them, so instead we're gonna go Bizarro.  We've shelved the Stallion for now and we're rolling out the One-Legged-Pony.  It's a tremendous package adjustment.