Tremendous Is A State Of Mind

Share All sharing options for: Tremendous Is A State Of Mind 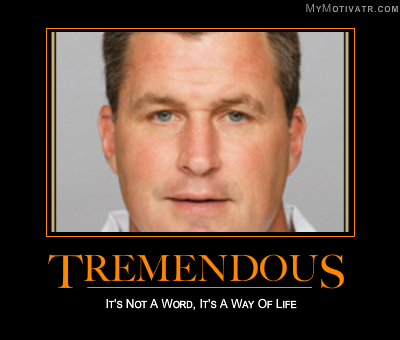 I hate to say it but more and more it's looking like Doug Marrone isn't the master of "tremendous."  Rather, it's the other way around.

Two weeks back, Minnesota's Tim Brewster tried to out-tremendous HCDM with some modicum of success.  And now, Northwestern's Pat Fitzgerald is bringing the tremendous heat when discussing what it's like to coach his alma mater:

"It's tremendous. I think when you have an (alumnus) in the leadership position of the football program, you have someone who buys into everything the university stands for," Fitzgerald said in a conference call on Tuesday.

It's not just Syracuse-related either.  Look all around college football.  Tremendous has taken over.

I thought the crowd was great.  The crowd was our 12th man.  They lifted us up all night long, and it was just a tremendous celebration for the state of Minnesota, being back at home. - Tim Brewster

"I think there is a tremendous amount of feeling for Nolan on the team and obviously, not only is Nolan very well liked, but he is very well respected." - Ralph Friedgen

They are a fast team and they are playing very well right now. It is going to be a tremendous challenge for our guys. - Bill Stewart

"No doubt, I spent seven great years of my life there, with tremendous moments – special moments – not just with those coaches, but those kids." - Steve Sarkisian

"They showed tremendous resilience two weeks in a row, found a way to believe in each other; they believe that good things are going to happen and they continue to work hard." - Tim Brewster

The Three Idiots think this isn't just random.  No, no...this is an organized, institutional program meant to tremendous-ize our society:

When you get hired to coach at your alma mater, they give you a handbook, and page one of that handbook almost certainly demands that the coach use the word tremendous in every interview - because that's just tremendous.

Given the work from so many non-alums as well, I'm willing to bet it's not just for certain coaches but for all coaches.  It's knowledge you're given from the moment you're hired.  Like how they always tell the new President what really happened at Area 51.  As a football coach, you become part of something. A tremendous something.